The Emergence of Gog and Magog 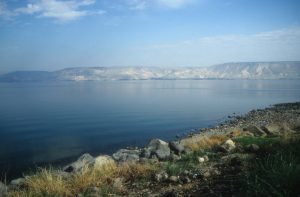 They will drink up all the water of that lake and by the time those that constitute the latter part of that same army pass the lake, they will say, “There used to be water here (long ago)”

During the reign of Prophet `Isa (Jesus) (peace be upon him), who will descend at the end of time before Doomsday, people will live an extremely peaceful life filled with prosperity and abundance. Then the wall which imprisons Ya’juj and Ma’juj (Gog and Magog, who are the tribes which inhabited the land behind two huge mountains) will break and they will surge forth in large numbers.

This is recorded in the Glorious Qur’an, in the verse (which means): “But when Ya’juj and Ma’juj are let loose and they rush headlong down every hill.” (Al-Anbiya’ 21:97)

Who are Gog and Magog?

Dhul Qarnayn, who was a pious and just ruler, traveled to many lands and liberated them, establishing justice and the Law of Allah therein. Allah, the Most Exalted, provided him with material strength through which he was able to carry out his liberation campaigns and missions.

He once carried out a mission in three directions, the far west, the far east, and then in a northerly direction. It was here that he came across a tribe of people who complained to him about the tribes of God and Magog which inhabited the land behind two huge mountains and often emerged from behind these mountains to perpetrate acts of anarchy and plunder among them. They requested Dhul Qarnayn to erect a barrier between themselves and the tribes of God and Magog so that they could be saved from their atrocities.

With the material strength at his disposal, Dhul Qarnayn enlisted their physical labor and set about erecting a high wall between the two mountains. The height of the wall or its exact length is unknown. What is known is that the height of this wall reaches that of the summit of both mountains. It is made with blocks or sheets of iron, which is further strengthened by molten brass. In this manner, Gog and Magog are unable to scale the wall, or cross it, except when it is the Will of Allah.

Allah Almighty says (what means): “… And when the promise of my Lord approaches (Doomsday), He will level it (the barrier) to dust.” (Al-Kahf 18:98)

Gog and Magog are situated in a land which is hidden from our gazes and the exact location of which is unknown.

Though many interpretations do exist in this respect, none of these can be said to be absolute.

They are human beings and, according to a narration, they are from the progeny of Yafith Ibn Nuh (Japheth son of Noah).

Some narrations about Gog and Magog

1- In a lengthy narration reported by Al-Nawwas Ibn Sam`an (may Allah be pleased with him), Prophet Muhammad (peace be upon him) said:

“…Allah will send revelation upon `Isa that ‘Such a creation of mine is now going to emerge that no power will be able to stop them. Therefore, take my servants and ascend the Mount of Tur.’ Then, Gog and Magog will emerge and surge forth in all their fury.

When those from among them who constitute the former part of their army pass the lake of Tiberias (which is in northern Palestine), they will drink up all the water of that lake and by the time those that constitute the latter part of that same army pass the lake, they will say, “There used to be water here (long ago). When they reach the Mount of Khamr in Jerusalem, they will arrogantly proclaim: ‘We have conquered the people of the earth, now we will annihilate those in the sky.’ So saying, they will fire their arrows towards the sky. When the arrows return to the ground they will be blood-stained.

In the meantime, `Isa will be on the Mount of Tur with his followers. At that time, the head of an ox will be as valuable as is a hundred Dinars (gold currency) to you in this day. [This indicates the scarcity of provisions]. Faced with these hardships, `Isa and his followers will supplicate unto Allah (to remove this calamity). As a result, Allah will cause sores to appear on the necks of each and every individual of these people which will cause their death suddenly.

When `Isa and his followers descend from the Mount of Tur, there will not be a single space on the land where the dead rotting bodies of these people is not littered, giving off a horrendous odour. `Isa and his followers will once more supplicate unto Allah as a result of which Allah will send down huge birds whose necks will be as thick as those of camels and they will dump these bodies in a place where Allah Wills. (According to a narration by Tirmidhi, they will be dumped at a place called Nahbal).

Allah will then send down a heavy rain, the waters of which will flow in every part of the earth cleansing it thoroughly. It will rain for a period of forty days.

The Muslims will then burn the bows and arrows of the Gog and Magog for a period of seven years.

2- Zaynab Bint Jahsh (may Allah be pleased with her) said: “… Allah’s Messenger (peace be upon him) once awoke from such a sleep that his face was red and these words were on his tongue: ‘There is none worthy of worship except Allah. Destruction is upon the Arabs on account of the evil which has come close to them. Today a hole as big as this has opened up in the wall of Gog and Magog. (He indicated the size of the hole by forming a ring with his index finger and thumb.” [Al-Bukhari and Muslim]

3- Abu Hurayrah (may Allah be pleased with him) narrated that: “Every day Gog and Magog break (dig) through the wall erected by Dhul Qarnayn until they reach the end of it, to that extent that they can actually see the light on the other side. They then return (home) saying that ‘We will resume tomorrow.’ But Allah Almighty causes the wall to return to its original thickness, and the next day they start digging through the wall all over again. This process continues each day until as long as Allah Wills them to remain imprisoned. When Allah Wills them to be released, then at the end of the day they will say, “If Allah Wills, tomorrow we will break through.” The following day they will find the wall as they had left it the previous day (i.e. it will not have returned to its original state) and after breaking the remaining part of it they will emerge.” [Ahmad, Al-Tirmidhi and Ibn Majah]