Faith in God Free of Idolatry 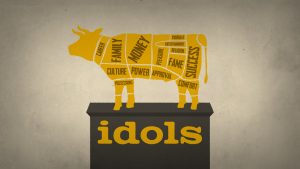 Loving a being more than God or loving him/it as one ought to love God is again a form of idolatry.

“Have you seen him who has taken his whims and desires to be his god? Will you then be his guardian?” (Al-Furqan: 43)

“Shirk,” the word used for idolatry in Arabic means “partnership/association.”

In the Qur’an, it refers to ascribing associates to God or deeming someone or something, called idols or false-gods, worthy of worship beside or in addition to God. Idolatry, though, is not limited to worshipping totems or non-living beings. Because man’s responsibility is to serve his Creator and to strive to earn His good pleasure alone, his pursuit of any other goal is to ascribe worship to something other than God. For instance, a person would be guilty of idolatry if he were to seek the pleasure of people instead of God’s.

Likewise, it would again be ascribing associates to God if one’s purpose in life is to satisfy his whims and desires rather than to earn God’s good pleasure. Many people ascribe divinity to things like money, status, wealth and so on.

The Qur’an refers to idolaters of Arab society, who set aside a portion of their crops and cattle for their idols, as follows:

“They assign to God a share of the crops and livestock He has created, saying, ‘This is for God,’—as they allege—‘and this is for our idols.’ Their idols’ share does not reach God whereas God’s share reaches their idols! What an evil judgment they make!” (Al-An`am: 136)

As is mentioned in the verse above, idolaters assign a part of their wealth to God and another part to their idols. This is characteristic of the delusion of idolaters.

Loving a being more than God or loving him/it as one ought to love God is again a form of idolatry. Similarly, someone who fears a being as he should fear God, idolizes it, since he assumes that that being possesses a might apart from and independent of God.

Muslims, however, firmly believe that everything is created by God, that all affairs are regulated by Him, that causes do not have any power to produce a result independently, that every event is predetermined and created by God, that God is the possessor of the ultimate will and judgment. This is the kind of belief system that God reveals to us in the Qur’an.

Deviation from these tenets, believing that everything occurs spontaneously, as the result of coincidences, attributing the power to create to some other causes, are all forms of ascribing associates to God. God does not forgive idolatry:

“God does not forgive anything being associated with Him but He forgives whoever He wills for anything other than that. Anyone who associates something with God has gone very far astray.” (Al-Nisa’: 116)

In a Prophetic hadith, when God’s Messenger (Peace and blessings be upon him) was asked, ‘What is the biggest sin in the sight of God?’ He also said, ‘To set up rivals unto God although He alone created you.’ (Al-Bukhari)