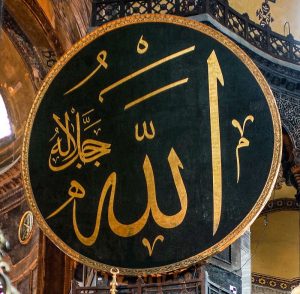 The Qur’an refers to the erroneous beliefs adopted by Christians and Jews and makes known the correct belief.

The Torah and the Gospel, the earlier revelations from Allah, have lost their original authenticity since the words and interpolations of man have been incorporated into them. This is one of the reasons for which the Qur’an was sent. That the holy books preceded the Qur’an were distorted by man is related by Allah as follows:

Distortion of the Torah and the New Testament led the proliferation of false beliefs among their adherents. These holy books include beliefs and ideas that derive from outside of Allah’s true religion. This manifests itself in the distortion of the true revelation, and the depiction of Allah as a being with weaknesses and imperfections peculiar to human beings. (Truly, Allah is above what they ascribe to Him).

In the corrupted Torah, for instance, a story has been fabricated in which Allah is depicted as a being who was defeated in a wrestling bout with the Prophet Jacob (Peace be upon him). Similarly, in another tale, it is claimed that having created the world in six days, Allah became weary and rested on the seventh day. However, Allah, being exalted far above any imperfections, cannot become weary or in need of rest. This is related in the Qur’an as follows:

“We created the heavens and the earth, and everything between them, in six days and We were not affected by fatigue.” (Qaf 50:38)

“Do they not see that Allah—He Who created the heavens and the earth and was not wearied by creating them—has the power to bring the dead to life? Yes indeed! He has power over all things.” (Al-Ahqaf 46:33)

This reveals that the adherents of these books have swerved from the straight path, and have not had an accurate understanding of Allah and His attributes.

The Qur’an, on the other hand, is under Allah’s protection and is the only book revealed by Him to have survived intact. The Qur’an is the book of Islam, the only true religion:

“If anyone desires anything other than Islam as a religion, it will not be accepted from him, and in the hereafter, he will be among the losers.” (Al ‘Imran 3:85)

The Qur’an refers to the erroneous beliefs adopted by Christians and Jews and makes known the correct belief. For instance, their saying, “Allah has a son (Jesus),” which is one of the tenets of Christianity, is said to be merely an irrational belief and a lie said against Allah:

Some other verses related to this matter are as follows:

“People of the Book! Do not go to excess in your religion. Say nothing but the truth about Allah. The Messiah, Jesus the son of Mary, was only the Messenger of Allah and His Word, which He cast into Mary, and a Spirit from Him. So believe in Allah and His Messengers. Do not say, “Three.” It is better that you stop. Allah is only One God. He is too Glorious to have a son! Everything in the heavens and in the earth belongs to Him. Allah suffices as a Guardian” (Al-Nisa’ 4:171).

“He is the Originator of the heavens and the earth. How could He have a son when He has no wife? He created all things and He has knowledge of all things” (Al-An’am 6:101).

Christian belief maintains that Allah created the universe and then left it on its own. Yet, as is stated earlier, Allah’s commands encompass the whole universe at every single moment; it is constantly within His control. Nothing can happen without His Will and control:

“He Who originates creation and then regenerates it and provides for you from out of heaven and earth. Is there another god besides Allah? Say: “Bring your proof if you are being truthful” (Al-Naml 27:64)

“God keeps a firm hold on the heavens and earth, preventing them from vanishing away. And if they vanished no one could then keep hold of them. Certainly, He is Most Forbearing, Ever-Forgiving” (Fatir 35:41).

To counter these false notions, and many others not mentioned here, Allah gives His sublime attributes for us in the Qur’an. This is in order to, not only answer these erroneous claims but also to guide those guilty of them to the true religion of Allah.

Everyone must acknowledge that Allah is One and that nothing is comparable to Him; He is free of any weaknesses. He encompasses everything, He exercises His command over creation at every moment, He is near to man, He has the power to do anything, He is the Most Merciful, He is the Just, He is the King of the Day of Judgement, He sees and hears everything, and is the most sublime in attributes.