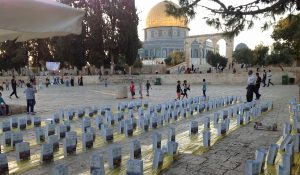 Even when a wife prepares the food for her husband and children, she has to purify her niyyah (intention) in order for her to gain the great reward by Allah the Almighty

Many people may ask about the importance of giving food to the fasting person(s) to break their fasting especially during the month of Ramadan. Here are some of the good and pleasant rewards associated with that good deed as can be understood from some shari’ah-based texts.

Imam Ahmed and At-Tirmidhi narrated from Zayd ibn Khalid that the Prophet (Peace and blessings be upon him) said what may mean, “Whoever breaks the fast of a fasting person will have a similar reward without diminishing the reward of the fasting one in any way.”

Breaking the fast of a fasting person is considered one of the best deeds.

Abu Hurairah (May Allah be pleased with him) narrated from the Prophet (Peace and blessings be upon him) what may mean, “Among the best of all deeds is to make your faithful brother happy, or to repay his debt, or to feed him bread.”

One may feed a fasting person to protect himself from Hell-fire.

‘Adiy ibn Hatim narrated from the Prophet (Peace and blessings be upon him) what may mean, “Guard yourself from the Hellfire even with half of a date in charity. If one cannot find it, then with a kind word.” (Al-Bukhari)

Ibn Rajab said, “Whoever gives out of charity to the worshippers of Allah, Allah the Almighty will give him manifold blessings and grants; for you reap what you sow!”

Earlier Muslims understood the importance of feeding other fasting persons and were, therefore, keen to observe that good deed. Ali ibn Abu Talib (May Allah be pleased with him) said, “To invite a group of my companions to eat a portion of food is dearer to me than going out for the market to buy a slave then set him/her free.” (Narrated by Al-Bukhari)

Abul Siwar al-Adawi once said: A group of people who belong to the Banu ‘Adiy used to perform the salah (prescribed prayer) in this masjid (mosque) and none of them has ever broken his fasting by himself (all alone); when one finds someone to share the food with him, he eats, or, he brings his food out into the masjid and share it with others.”

One of the righteous earlier Muslims once had a desire for some type of food and he was observing fasting; at the time of Maghrib (sunset), the food was brought to him and he heard a beggar saying: ‘Who would lend the Ever-Rich, the Ever-Plentiful, the Ever-Affluent?’ The righteous man said, ‘His slave who is void of good deeds [will do]!’ He, then, handed over the tray of food to the beggar and slept overnight with an empty stomach.

Preparing food for the fasting family

In the same vein, when a wife prepares the food for her husband and children, she has to purify her niyyah (intention) in order for her to gain the great reward by Allah the Almighty. This is attested to by the following Prophetic hadith.

It is reported that Anas (May Allah be pleased with him) said: “We were with the Messenger of Allah (Peace and blessings be upon him) in a travel. Some were fasting and others were fast breaking. The fast breaker girded themselves and did double the work as the fasting persons. The Prophet (Peace and blessings be upon him) said: ‘The break fasters went today with the reward.’” [Reported by Muslim]

Though those companions were not observing fasting, they gained all the reward. So, what about those who serve the fasting person while s/he himself/herself is observing fasting like him/her?! There is no doubt that his/her reward will be duplicated. We may also say that many men have been deprived of this reward and good deed that has been peculiar to women alone. Therefore, a Muslim woman should purify her intention while preparing the food for the fasting family. The Prophet (Peace and blessings be upon him) was reported to have said the following:

Khalid ibn Zaid Al-Juhani narrated that the Prophet (Peace and blessings be upon him) said what may mean: “Whoever gives a fasting person food to beak his fasting, will have the same reward as his, without diminishing the fasting person’s reward in any way.” (At-Tirmidhi)

One thought on “Feeding the Fasting Persons”