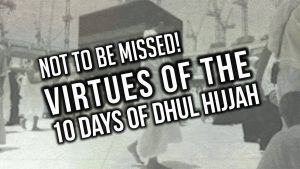 “No good deeds done on other days are superior to those done on these days [meaning the ten days of Dhul-Hijjah].”

Days of Virtue and Righteous Deeds

Ibn’ Abbas says about the Ayah, “Remember Allah during the well known days,” that it refers to the first ten days of Dhul-Hijjah.” [This is related by al-Bukhari]

Allah swears an oath by them, and swearing an oath by something is indicative of its importance and great benefit. Allah says (interpretation of the meaning) “By the dawn; by the 10 nights” [al-Fajr 89:1-2]. Ibn Abbas, Ibn al-Zubayr, Mujahid and others of the earlier and later generations said that this refers to the first ten days of Dhul-Hijjah. Ibn Katheer said: “This is the correct opinion.” [Tafseer Ibn Katheer, 8/413]

Praise be to Allah Who has created Time and has made some times better than others, some months and days and nights better than others, when rewards are multiplied many times, as a mercy towards His slaves. This encourages them to do more righteous deeds and makes them more eager to worship Him, so that the Muslim renews his efforts to gain a greater share of reward, prepare himself for death and supply himself in readiness for the Day of Judgment.

This season of worship brings many benefits, such as the opportunity to correct ones faults and make up for any shortcomings or anything that one might have missed. Every one of these special occasions involves some kind of worship through which the slaves may draw closer to Allah, and some kind of blessing though which Allah bestows His favor and mercy upon whomsoever He will. The happy person is the one who makes the most of these special months, days and hours and draws nearer to his Lord during these times through acts of worship; he will most likely be touched by the blessing of Allah and will feel the joy of knowing that he is safe from the flames of Hell. [Ibn Rajab, al-Lataif, p.8]

Ibn’Abbas reports that the Messenger of Allah (Peace and blessing be upon him) said, “No good deeds done on other days are superior to those done on these days [meaning the ten days of Dhul-Hijjah].” The companions asked, “O Messenger of Allah, not even jihad in the way of Allah?” He said, “Not even jihad, except for the man who puts his life and wealth in danger [for Allah’s sake] and returns with neither of them.” [This is related by the group except Muslim and an-Nasa’i]

Ahmad and at-Tabarani record from Ibn’Umar that the Messenger of Allah (Peace and blessing be upon him) said, “There is no day more honorable in Allah’s sight and no acts more beloved therein to Allah than those in these ten days. So say tahlil (There is no deity worthy of worship but Allah : La ilaha illAllah), takbir (Allah is the greatest Allahu Akbar) and tahmid (All praise is due to Allah : alhumdulillah) a lot [on those days].” [Reported by Ahmad, 7/224; Ahmad Shakir stated it is saheeh]

Abu Hurairah relates that the Messenger of Allah (Peace and blessing be upon him) said, “There are no days more loved to Allah for you to worship Him therein than the ten days of Dhul Hijja. Fasting any day during it is equivalent to fasting one year and to offer salatul tahajjud (late-night prayer) during one of its nights is like performing the late night prayer on the night of power. [i.e., Lailatul Qadr].” [This is related by at-Tirmidhi, Ibn Majah, and al-Baihaqi]

Hafsah reported, “There are five things that the Messenger (Peace and blessing be upon him) never abandoned: fasting the day of ‘Ashurah, fasting the [first] 10 [days of Dhul-Hijjah], fasting 3 days of every month and praying two rak’ah before the dawn prayer.” [This is related by Ahmad and an-Nasa’i]

‘Uqbah ibn’Amr reported that the Messenger of Allah (Peace and blessing be upon him) said, “The day of ‘Arafah, the day of sacrifice, and the days of tashreeq are ’ids for us–the people of Islam–and they are days of eating and drinking.” [This is related by “the five,” except for Ibn Majah. At-Tirmidhi grades it sahih]

Abu Hurairah stated, “The Messenger of Allah (Peace and blessing be upon him) forbade fasting on the day of ’Arafah for one who is actually at ‘Arafah.” [This is related by Ahmad, Abu Dawud, an-Nasa’i, and Ibn Majah]

At-Tirmidhi comments: “The scholars prefer that the day of ‘Arafah be fasted unless one is actually at ‘Arafah.”

It is Sunnah to say Takbeer (“Allahu akbar”), Tahmeed (“Al-hamdu Lillah”), Tahleel (“La ilaha ill-Allah”) and Tasbeeh (“Subhan Allah”) during the first ten days of Dhul-Hijjah, and to say it loudly in the mosque, the home, the street and every place where it is permitted to remember Allah and mention His name out loud, as an act of worship and as a proclamation of the greatness of Allah, may He be exalted. Men should recite these phrases out loud, and women should recite them quietly.

Allah says (interpretation of the meaning):

“That they might witness things that are of benefit to them (i.e., reward of Hajj in the Hereafter, and also some worldly gain from trade, etc.), and mention the name of Allah on appointed days, over the beast of cattle that He has provided for them (for sacrifice)…” [al-Hajj 22:28]

Takbeer at this time is an aspect of the Sunnah that has been forgotten, especially during the early part of this period, so much so that one hardly ever hears Takbeer, except from a few people. This Takbeer should be pronounced loudly, in order to revive the Sunnah and as a reminder to the negligent. There is sound evidence that Ibn Umar and Abu Hurairah (may Allah be pleased with them) used to go out in the marketplace during the first ten days of Dhul-Hijjah, reciting Takbeer, and the people would recite Takbeer when they heard them. The idea behind reminding the people to recite Takbeer is that each one should recite it individually, not in unison, as there is no basis in Sharee’ah for doing this.

One thought on “First 10 Days of Dhul Hijjah”