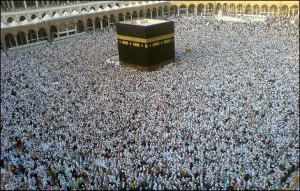 Islam does not only care about humans, but it also cares about the environment and natural resources.

Hajj, one of the five main pillars of Islam, has a message for the benefit and well-being of all people of the world, be they Muslim or not. It has a further mission towards all creatures, including animals, birds, plants, etc. It is an annual celebration that gathers millions of people, men and women, from different ages, languages, races, cultural backgrounds, colors, and nationalities in a wonderful unique peaceful scene.

Though hajj is obligatory once in a lifetime on financially and physically capable Muslims, every single Muslim, man or woman, rich or poor, dreams to repeatedly offer it.

Hearts are attached to visiting the Ka`bah and performing hajj rituals. This is in response to Prophet Ibrahim’s call mentioned in the Qur’an:

“Our Lord! I have settled some of my offspring in an uncultivable valley near unto Your Holy House, our Lord! that they may establish proper worship; so fill the hearts of some among men with love toward them, and provide them with fruits in order that they may be thankful.” (Ibrahim 14: 37)

Islam, the religion of peace and well-being for all peoples, makes the months fixed for Hajj—namely Dhul Qi`dah, Dhul Hijjah, and Muharram—as sacred months in which launching wars and fighting is prohibited. This is to maintain and promote peace in the world. Hajj rituals, moreover, convey messages of peace: peace with oneself, peace among Muslims, peace with non-Muslims, and peace with the environment and with nature.

Hajj rituals fill a Muslim’s heart with inner peace and tranquilly. Inner peace is one of the significant blessings and fruits of hajj. Various rituals of hajj purify one’s body and soul. Hajj is all about the remembrance of Allah (dhikr), repentance, du`aa’, seeking Allah’s forgiveness, devotion, and acquiring refined morals and values, which all lead to inner peace.

From the very beginning of the hajj trip, a Muslim declares “labayka Allahumma hajjan (O Allah, I wholeheartedly resolve to offer hajj only for Your Sake)”. When a pilgrim departs his homeland, he leaves his family and money in Allah’s Trust. This implants in one’s heart true reliance on Allah. When the pilgrim puts off his normal clothes and wears the clothes of iharm, he then remembers that one day he will leave this world with nothing, and that what counts are only good deeds. Throughout the hajj trip, a Muslim engages himself in much dhikr and reflection on Allah’s creation. This meaning is clear in the following Qur’anic verses on hajj and its rituals:

“Hajj is (in) the well known months, and whoever is minded to perform hajj therein (let him remember that) there is (to be) no lewdness nor abuse nor angry conversation in hajj. And whatsoever good you do Allah knows it. So make provision for yourselves (here after); for the best provision is to ward off evil. Therefore keep your duty unto Me, O men of understanding. It is no sin for you that you seek the bounty of your Lord (by trading). But, when you press on in the multitude from `Arafat, remember Allah by the sacred monument. Remember Him as He has guided you, although before you were of those astray. Then hasten onward from the place whence the multitude hasten onward and ask forgiveness of Allah. Lo! Allah is Forgiving, Merciful. And when ye have completed your devotions, then remember Allah as you remember your fathers or with a more lively remembrance.” (Al-Baqarah 2: 197-200)

On carrying out hajj rituals, a Muslim hopes to have all his sins forgiven, and to return home as free of sins as a newly-born baby. Abu Hurayrah (may Allah be pleased with him) reported that Prophet Muhammad (peace be upon him) said, “Whoever performs Hajj and stays away from lewdness, wrangling, and obscenities will return home like a newborn.” (Al-Bukhari) After hajj, a Muslim enjoys inner peace and looks forward to meeting Allah in Paradise. The Prophet (peace and blessings be upon him) said,

“(The performance of) `Umrah is an expiation for the sins committed (between it and the previous one). And the reward of Hajj mabrur (the one accepted by Allah) is nothing except Paradise.” (Al-Bukhari)

Hajj mabrur leads to inner peace, which is manifested outwardly in the values of justice, honesty, respect, generosity, kindness, forgiveness, mercy, and empathy.

Millions of Muslims—with different backgrounds, languages, races, and juristic schools—offer hajj, facing a single qiblah (the Ka`bah), performing the same rituals, and wearing similar clothes.  A pilgrim should not harm any living thing, and is not allowed to quarrel or fight with anything or anyone. The state of ihram teaches a Muslim to be peaceful and forgiving, in spite of being inevitably pushed and shoved by some of the millions of people around him.

Hajj teaches a Muslim to live in peace with his fellow Muslim brothers and sisters irrespective of their different views or races. In his farewell hajj, Prophet Muhammad (peace be upon him) declared a Muslim’s life, money, and honor are as inviolable. `Ikrimah reported: Ibn `Abbas said: “Allah’s Messenger delivered a sermon on the Day of Nahr (`Eid Al-Adha), and said, ‘O people! (Tell me) what is the day today?’ The people replied, ‘It is the forbidden (sacred) day.’ He asked again, ‘What town is this?’ They replied, ‘It is the forbidden (Sacred) town.’ He asked, ‘Which month is this?’ They replied, ‘It is the forbidden (Sacred) month.’ He said, ‘No doubt! Your blood, your properties, and your honor are sacred to one another like the sanctity of this day of yours, in this (sacred) town (Makkah) of yours, in this month of yours.’ The Prophet repeated his statement again and again. After that he raised his head and said, ‘O Allah! Haven’t I conveyed (Your Message) to them’. Haven’t I conveyed Your Message to them?’ “Ibn `Abbas added, “By Him in Whose Hand my soul is, the following was his will (the Prophet’s will) to his followers: “It is incumbent upon those who are present to convey this information to those who are absent Beware don’t renegade (as) disbelievers (turn into infidels) after me, striking the necks (cutting the throats) of one another.'” (Al-Bukhari)

The Prophet’s words “O Allah! Haven’t I conveyed (Your Message) to them” clearly indicate that the Prophet’s message he conveyed in his farewell hajj, which is still followed today in the rituals of hajj, promote peace.

During the hajj rituals, a Muslim respects and accepts the opinions of different juristic schools. He should never fight or quarrel with anyone, even those who are different from him in stances and conduct. He lives in peace, leaves others enjoy peace, and trains himself to be peaceful and forgiving. Thus, respect, mercy, kindness, and tolerance prevail and dominate the hajj rituals.

On returning back home, a Muslim will be well trained on how to live in peace with members of his community who may differ with him in juristic opinions, language, race, etc. A Muslim will be peaceful towards all his neighbors, friends, co-workers, and members of the community.

A wonderful message of hajj is that a Muslim should live in peace with his brothers in humanity, even if they are of different faiths. In his farewell sermon in hajj, Prophet Muhammad (peace be on him) maintained that all humans are brothers in humanity. He (peace be on him) said, “O people! Verily, your Lord is one and your father is one. There is no superiority for an Arab over a non-Arab and for a non-Arab over an Arab; nor for red over the black nor for the black over the red except in piety. Verily, the noblest among you is he who is the most pious.” (Al-Bayhaqi, Shu`ab Al-Iman)

In hajj, a pilgrim meets and peacefully deals with people from different languages, ethnicities, cultural backgrounds, and schools; so he trains himself to accept plurality and diversity. He will be open to live in peace and co-exist with people of different faiths and cooperate with them for the betterment of their community and the whole world. He will adhere to the Qur’anic instructions,

“…But help you one another unto righteousness and pious duty. Help not one another unto sin and transgression, but keep your duty to Allah. Lo! Allah is severe in punishment.” (Al-Ma’idah 5: 2)

Peace with the Environment

In hajj, it is prohibited for a Muslim, while in the state of ihram, to hunt, hurt, injure or kill a free animal, including domesticated animals, whether in the Haram (Sacred masjid) area or outside, and whether it is hunted for eating or not. It is absolutely prohibited to hunt in the Haram even if the hunter is not in the state of ihram. It is also impermissible for any person to cut or pull out from roots, trees, plants or other kinds of vegetation including thorny bushes, etc., growing in the sacred precincts of Makkah.

Ibn `Abbas reported: Prophet Muhammad (peace be on him) said, “Allah made Makkah a sanctuary and it was neither permitted for anyone before, nor will it be permitted for anyone after me (to fight in it). . . . None is allowed to uproot its thorny shrubs or to cut down its trees or to chase its game or to pick up its luqata (lost objects) except by a person who would announce it publicly.” (Al-Bukhari)

Given the above, it becomes crystal clear that “peace” for all is one of the significant universal messages of hajj. If people grasp and apply this message, the world will enjoy real peace, security, well-being, and prosperity.

Dr. Wael Shihab holds a PhD in Islamic Studies from Al-Azhar University and is the Head of the Shari`ah and Fatwa sections at the English website of Onislam.net. You may reach him at this e-mail address: wael.shihab@onislam.net.