A King and His Four Wives 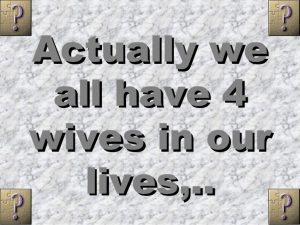 “Now, I have four wives and I do not want to go to the grave alone!”

Once upon a time, there was a king with four wives. He loved his fourth wife madly and did all he could to please her and make her happy.

As for the third wife, he loved her too but felt that she might leave him and go to another person at any time!

As far as the second was concerned, she was the one to whom he used to resort when calamities befall him; she was always especially attentive and considerate and always listened to him and alleviated his feelings.

As for the first wife, he neglected her, ignored her presence and used not to care about her or her feelings or give her her due rights though she loved him so much, cared about him so much, and had played a vital role in maintaining his kingdom.

One day, the king became critically ill and felt that his days are numbered. He thought to himself, “Now, I have four wives and I do not want to go to the grave alone!”

He summoned his fourth wife and both of them entered into the following dialogue.

The king: O my dear wife! I loved you more than all of my other wives and fulfilled all your desires and wishes; will you come and accompany me in my grave?!

Then, she left him without showing any sign of sympathy or consideration.

Then, the king called upon his third wife and the following dialogue took place:

The king: I have loved you all my life; will you come and accompany me in my grave?!

The third wife: Of course not! Life is so beautiful and when you die, I will get married to another person!

Then he summoned his second wife.

The king: I have always resorted to you and turned to you for solace when calamities befell me; you have always been sacrificing for me and lending me your hand! Will you come and accompany me in my grave?!

The second wife: Forgive me, I cannot fulfill that wish of yours. All I can do is to accompany you to your grave!

The king was sick at heart upon seeing the ingratitude and ungratefulness of those wives. Suddenly, a faint voice came from afar as saying: “I will come and accompany you in your grave! I will be with you wherever you go!”

The king looked to the source of the voice and found his first wife. She was very lean, weak and ill.

The king regretted his being negligent in the way he cared for her during his lifetime and said: “I should have cared for you more than I did to the others. Were I to restart my life once again, I would pay more attention to you and provide you with much more care than the other three wives of mine!”

In fact, each and every one of us has his own four wives.

As the fourth wife represents the body which no matter how we care for it and fulfill its wishes and desires, the body will leave us immediately when death befalls us.

The third wife represents one’s wealth and properties which leave us when death comes to us and go to other persons by way of inheritance or the like.

The second wife represents one’s household and friends who no matter what they will sacrifice for one’s sake, one should not expect them to do more than accompany him/her to one’s final abode and the cemetery when death befalls him/her.

As for the first wife, she represents one’s good deeds as one ignores doing good to it and caring for it and pay more attention to desires, wealth and friends at the expense of the good deeds though the good deeds are the only thing that will accompany one to his own grave and will stay with him/her for good.

I am really wondering, if our deeds appear to one of us today, in the shape of a human being, what will the form and shape of that human being be?

Will it be weak and neglected?

Or strong and receptor of much attention?