Prophet Muhammad: An Appreciation of Beauty 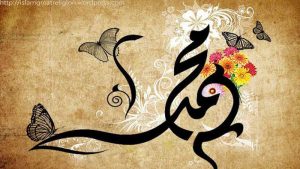 Prophet Muhammad: An Appreciation of Beauty

We are in the month of Rabi’-ul-Awwal wherein Allah blessed the world with the arrival of the greatest benefactor to humanity. That Prophet Muhammad (PBUH), who was designated as the Khatam an-Nabiyyin (Seal of Messengers) by the Creator; that Creator of Whom the Prophet in turn said …

We imbibe beauty and inculcate an appreciation of essential beauty by turning to the source of all that is beautiful, the Divine.

Beauty amidst the Gloom

The world looks so devoid of beauty and so filled with the ugliness of anger, hatred, wars, intolerance, oppression, and injustices. The world needs the guiding light of beauty that may bring rays into the darkness that is so pervasive. People seem to have lost appreciation of goodness and a real perspective on what is beneficial and beautiful. If we have lost the sense of beauty ourselves, how could we truly appreciate beauty?

The one devoid of beauty does not see the beauty that is around,

As the poet asks;

O complainant, what is your ailment? Imbibe beauty and you will see beauty everywhere.

Beauty was indeed manifested in the Prophetic pattern of life, in his example of decency, fidelity, reliability, integrity, constancy, and honesty. His loyalty in friendship; his modesty in success; his magnanimity in victory; his humility amidst praise, and his simplicity in lifestyle reflected the beauty of his unassuming character. His generosity, both of means and of time; his consideration for the poor (despite his own impoverished position) and his attention to the weak (despite his own challenges); all these remain inspiring. Beautiful indeed is his example. As the contemporary of the Prophet, poet Hassan bin Thabit observed;

Better than you, no eye has ever seen;

More beautiful than you, no woman has given birth to;

You are free from any defects of character,

As if you were designed according to your own specification.

The moon lightened at the light of your countenance;

It is not possible to praise thee befittingly,

In essence, after God, thou art the most significant.

The Prophetic style has always been empathically receptive, beautifully embracing in its variety and inclusivity. It could incorporate former slaves and future kings; impoverished people like Sumayyah but also wealthy ones like Uthman; foreigners like Salman and locals like Khadijah; youth like Ali and elders like Abu Bakr; former foes like Thumamha bin Uthaal and loving friends like Shayma; oppressed persons like Bilal ibn Rabah and privileged ones like Mus’ab ibn Umayr. This was the beauty of the Prophetic style. He could bring all these people together, in a hostile environment and yet succeed. The Prophetic style was compassionate and appealing. for he knew ..

Allah is kind and loves kindness in everything

The Prophet’s outstanding example of decency, fidelity, reliability, integrity, constancy, honesty remains unparalleled. His loyalty in friendship; his modesty in success; his magnanimity in victory, his humility amidst praise and his simplicity in lifestyle reflects the beauty of his unassuming character. His generosity, both of means and of time; his consideration for the poor despite his own impoverished position and his attention to the weak despite his own challenges; all these remain inspiring; all manifesting the eloquence of prophetic beauty in character.

The Prophet reached the highest state by his sublime character

He removed darkness by his beauty;

Excellent are all his characteristics and achievements …

Salutations upon him and his family.