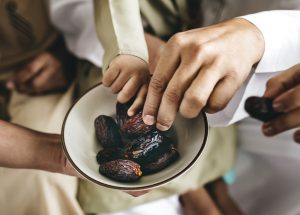 Ramadan is the month of fasting for Muslims the world over. Muslims refrain from eating, drinking, and sexual intercourse from dawn to dusk for the duration of Ramadan. For some, fasting may appear as a form of deprivation and of bodily exertion. On one level, abstaining from sensual needs and pleasures is indeed a physical experience. But those who stop at the physical aspects of fasting miss the essence of Ramadan and its purpose.

Fasting the month of Ramadan is one of the five pillars of Islam. These are the foundation upon which the entire structure of Islam is built. These consist of the declaration of faith, prayer, fasting Ramadan, paying of Zakah [the annual charity payment], and performing the pilgrimage to Makkah, known as hajj. Three of the five pillars of Islam are rituals, that is, prescribed religious acts whose rationale is not immediately available for understanding. These are prayer, fasting, and hajj. Muslims are required to do them because they are part of their religious duties, that is, they are part of their covenant with God.

As a ritual, fasting is a symbolic act whose meaning becomes gradually apparent through experience. The meaning embodied in a ritual is always unveiled when one immerses himself or herself in the act itself. This does not mean that fasting is not open to intellectual delineation, but rather any intellectual delineation either presupposes or predicts a meaning that can best become apparent through performing the symbolic act itself.

The essence of fasting Ramadan and its goal is summed in the Qur’an in one word: taqwa. “O you who believe! Fasting is prescribed to you as it was prescribed to those before you, that you may attain taqwa.” (Al-Baqarah 2:183)

But what is taqwa? And how does it relate to the physical act of fasting?

Taqwa is a recurring theme in the Qur’an and a paramount Qur’anic value. Taqwa is both an attitude and a process. It is the proper attitude of the human toward the divine that denotes love, devotion, and fear. Love to the source of good and beauty that make life worth living; devotion to God’s boundless wisdom and majesty; and fear of misunderstanding the divine intent or failing in maintaining the appropriate posture and relationship.

The attitude of taqwa cannot and does not stay in the confines of the human spirit, but is ultimately revealed in expression and action. The attitude of taqwa is ultimately revealed in, and in turn reveals, the true character it nurtures: the commitment to the sublime values stressed by divine revelations of courage, generosity, compassion, honesty, steadfastness, and cooperation in pursuing what is right and true.

Taqwa is equally the process by which the believers internalize the sublime values of revelation and develop their character. Thus the Qur’an reminds the believers that they should not reduce religious practices to a set of blind rituals, of religiously ordained procedures performed at the level of physical movement, and that they should always be mindful that religious practices, like praying and fasting, ultimately aim at bringing about moral and spiritual uplifting:

“It is not righteousness that you turn your faces towards East or West: But it is righteousness to believe in God and the Last day, and the Angels, the Book, and the Messengers; to give out of the things you hold dear to your kin, the orphans, the needy, the wayfarer, the one who asks, and to free the slave. And to be steadfast in prayer and to give for charity. To fulfill the covenants you have made, and to be firm and patient in times of pain, adversity, and panic. Such are the people of truth, and such are the God-conscious.” (Al-Baqarah 2:177)

As Ramadan helps us to develop our moral discipline, it also reminds us of the plight of those who live in constant hunger and deprivation. We are reminded time and again by the revealed book that religiosity is meaningless and pointless if it does not lead people to care and share:

“Have you seen one who belies judgment; it is the one who repulses the orphan, and does not insist on feeding the needy. So woe to those who pray but are neglectful of their prayers. Those who are guilty of duplicity and refuse to provide for the ones in need.” (Al-Ma`un 107:1-7)

Fasting Ramadan, like other religious practices in Islam, is an occasion for pursuing moral excellence that can also be translated into excellence in social organization and interaction. In a tradition that was reported in the books of Bukhari and Muslim, the Prophet was once asked: “O messenger of God! who is the most honored of people? He said: the one who has most taqwa. They said: this is not what we are asking about…. He said: … the best of them prior to Islam is the best of them in Islam if they comprehend (the revealed message).”

It is not difficult to see that the Prophet’s companions did not have immediate access to the meaning of taqwq, as many Muslims today still don’t. When they did not accept his first statement as an answer, the Prophet gave them an explanation of what he meant when he responded to their question about “the most honored of people.” In responding with the question, the Prophet was reiterated the meaning provided by the Qur’an: “Verily the most honored of you in the sight of God is the most righteous (mutaqi).” (Al-Hujurat 49:13) The Prophet’s statement underscores the fact that taqwa as a moral and spiritual quality is significant in the human world insofar as it leads people to act with compassion and respect toward others.

Nothing does empower a community more than the development of the moral character of its members. By embodying the moral values of revelation, people can have a higher social life, one that is based on mutual respect and help, as it is based on honest and fair dealings, and a sense of duty that encourages people to observe the principles of right and justice as they pursue their varying and competing interests. The theme that moral life based on the notion of taqwa leads to societal strength and prosperity is an oft repeated theme in the Qur’an: “Whoever has taqwa of God, He prepares a way out for them, and He provides them from sources they never could imagine.” (At-Talaq 65:2-3) And again: “Verily the earth is God’s to give as a heritage to such of His servants as He pleases; and the end is best for the God-conscious.” (Al-A`raf 7:128)

Fasting is not simply a time during which people deprive themselves from physical pleasures, but is an occasion to exercise moral restrain and experience spiritual growth. Ramadan is a time of remembrance of God and renewal of commitment to the high and noble values he revealed to mankind. And nothing would give us the sense of spiritual fulfillment than a state of taqwq, of God-consciousness, that Ramadan helps us to realize.

Dr. Louay M. Safi serves as the executive director of ISNA Leadership Development Center, an Indiana based organization dedicated to enhancing leadership awareness and skills among American Muslim leaders, and a founding board member of the Center for the Study of Islam and Democracy. He writes and lectures on issues relating to Islam, American Muslims, democracy, human rights, leadership, and world peace. His commentaries are available at his Blog: http://blog.lsinsight.org