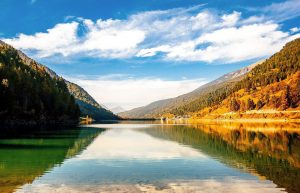 Could inviting others to Islam, to truth and goodness, ever be called pointless?

Can the righteous and the faithful ever be called deprived or ‘cut off’?

Please join us as we briefly explain the beautiful surah of Al-Kawthar which answers the questions above.

Scholars disagree about where Surah Al-Kawthar was revealed but there is some consensus about the reason for the revelation.

There are several narrations that relate to a particular situation between Prophet Muhammad and the polytheists.

“This ayah was revealed about Al-`As ibn Wa’il. Whenever the Messenger of Allah would be mentioned (in his presence) he would say, ‘Leave him, for indeed, he is a man who is cut off from having no descendants. So when he dies, he will not be remembered.’ Therefore, Allah revealed this Surah.”

`Uqbah ibn Mu`ayt, Ka`b ibn Al-Ashraf, and Abu Lahab have also reportedly articulated similar sayings. They, and sadly many others, used to defame the Prophet to deter people from listening to him.

After the early deaths of the Prophet’s sons, the polytheists thought that the Prophet and his message would be forgotten after he died. They would be overheard saying, “Do not be bothered with him; he will die without descendants and that will be the end of his mission!”

Therefore, when the Surah was revealed, it did a number of things.

Firstly, it comforted the Prophet’s heart; it reminded him of the abundant goodness that Allah bestowed upon him in the present life and in the Hereafter.

Secondly, it assured Prophet Muhammad of the loss and fate that was awaiting the polytheists.

And lastly, it guided the Prophet to how he should act when faced with ridicule.

What Is Meant by Al-Kawthar?

Let’s start with the first ayah of the surah, “We have certainly given you Al-Kawthar”.

The term Al-Kawthar is derived from Al-Kathrah, which translates to ‘abundance’ and ‘multitude’.

This term, Al-Kawthar, was used to symbolize the goodness Allah the Almighty had given to His Prophet.

This goodness, which is widely abundant, plentiful, overflowing, and never-ending, truly counters all the defamatory things that the disbelievers said about him (peace and blessings be upon him).

When we read the Qur’an, we see Al-Kawthar flows with richness for all those who approach it.

Al-Kawthar is found in the Prophet’s Sunnah, which benefits all who follow it.

It is also found in the good deeds done by millions of people who followed the Prophet’s way yesterday. And all those who will continue doing so until the end of days.

Some scholars say, Al-Kawthar symbolizes a river in Jannah. They are right; however, the river which is mentioned in several hadiths, is just an example of this unlimited abundance!

Check out one of many of the hadiths that mention Al-Kawthar the river. Imam Ahmed recorded from Ibn `Umar that the Messenger of Allah said,

“Al-Kawthar is a river in Paradise whose banks are of gold and it runs over pearls. Its water is whiter than milk and sweeter than honey”. (At-Tirmidhi)

The ayah, “We have certainly given you Al-Kawthar,” ascertains the never-ending abundance that was given to the Prophet in this life, as well as glad tidings to some of what he will be given in Paradise.

Surely, when these bounties come from the Almighty, and He mentions this in His Qur’an, this surely comforts the Prophet’s heart. And leaves him feeling assured that he will be the winner in both lives. A divine order to the Prophet and the believers

“So pray to your Lord and sacrifice to Him,”

In return for the abundant goodness and the divine refutation of the false allegations made by the polytheists, the Quran directs the Prophet to be completely and sincerely thankful to Allah.

He is guided to observe all acts of worship including the obligatory prayer and sacrifice sincerely and for the sake of Allah Alone, without ascribing any partners to Him, Glory be His.

As true believers in Allah, neither the Prophet nor his followers, should follow the steps of the disbelievers, in any way.

The Real Cut off

“Surely, he who hates you is the one cut off,”

In this last ayah of the surah, we read it is those who slander the Prophet. Those who say that he had no posterity and deems his message as no good, they are indeed the ones who are really cut off.

These people are no longer remembered by anyone except for what they have said and done in defiance of the truth.

On the contrary, the Prophet’s outstanding impact on humanity is still and will be remembered up till the end of days.

So, now we know the answers to the above

The answer to both questions is an emphatic “NO!”

Calling others to the religion of Allah, and to the truth and goodness of this present life and the Hereafter cannot, in any way, be described as futile or fruitless.

Those who invite people to Allah are the faithful followers of the Prophets and the guides appointed by Allah to observe the Prophets’ mission.

Surely, they will be successful regardless of the hardships they may encounter on the way of Da`wah; these hardships are just part of the job!

Similarly, these faithful callers can never be called deprived or cut off. Their impact and influence on their own people, and humanity at large, is guaranteed by Allah the Almighty, Who describes them as being “successful” (Aal-`Imran 3:104).

The ones who are really deprived and cut off are their enemies; those {Who averted [people] from the way of Allah and sought to make it [seem] deviant while they were, concerning the Hereafter, disbelievers} (Al-A`raf 7:45).

You can reach him at [email protected].