Ten Principles for Those Seeking the Path of Allah 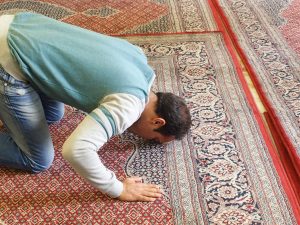 Principle 1: Have a sincere, unwavering intention.

Prophet Muhammad said, “each person will be rewarded for what he intended” (Muslim). This calls for determination in the heart to continuously act or to abstain from something only for God’s sake. A sign of having sincere intentions is that one does not change his resolve for fleeting reasons; what is done for God, the Truth, should not be forsaken to please His creation.

Principle 2: Work purely for God, (the One) without partners or associates.

Prophet Muhammad said: “worship God as though you see Him, but if you do not see Him (know that) He sees you” (Muslim). A sign of working purely for God is to not accept anything except the truth and to see everything else besides the truth as vain and fleeting. As the prophet said, “Let the slave of the dinar perish” (Bukhari). One should also beware of falling into doubtful matters. As Prophet Muhammad: “Leave what is doubtful for what is not doubtful” (Tirmidhi and Nasa’i).

Principle 3: Align one’s desires with the guidelines and rulings of the Shari`ah (Islamic law).

Be patient in times of hardship and difficulty, when struggling with personal desires, and in avoiding sinful acts and pleasures. Whoever practices this regularly reaches a state whereby he is in his sleep as if he were awake [worshipping], in his mixing with people as if he were in seclusion, in his fulfillment as if he were hungry, in his pride as if he were humiliated, and in talking to others as if he were silent.

Principle 4: Base one’s actions on following [the prophet’s way and scholarly opinions], and not on innovation.

This prevents the following of one’s own desires and becoming proud of one’s own opinion. Surely, a person who takes himself as his own ruler will not succeed.

Principe 5: Have high ambitions, and do not procrastinate.

It is said: “do not leave today’s work until tomorrow,” because actions are built on each another; and whoever is content with a lower [status] will be deprived of a higher one.

Principle 6: Be aware of one’s incapability and insignificance.

This is not referring to laziness in worship or lack of productivity in work. It is about realizing that one is not capable of doing any action without support from God, the Most Capable, and Most Generous. This awareness is also manifested in viewing other people with respect and reverence, for people are means and helpers of one another on the path to God, the Exalted and Most Bountiful.

Principle 7: Have fear and hope, and do not be sure that your good deeds are accepted until you have witnessed this [on the Day of Judgment].

One should have hope not because of the good deeds themselves, but because God Himself is the Most Benevolent and Generous.

Principle 8: Be consistent in one’s wird (a regular litany of worship), for the one without a wird does not have an additional source of support from God.

With a wird, the soul opens up in public and private; it becomes more mindful of the rights of others; it increases in loving and hating for others what it loves or hates for itself. Also, having that wird makes one work more for God in order to please Him, just as a person would love that God does for him what he finds pleasing.

Principle 9: Be constantly observant of your actions and do not stray away from the remembrance of God even the blink of an eye.

For the one who is always observant of his heart for the sake of God, and does not let other than God enter his heart besides, is one who has truly found God, experienced His Benevolence and has reached ‘ilm al-yaqeen (certain knowledge). This is manifested in seeing God as the Enabler or Mover of everything that remains still or in motion around us. One’s mindfulness then increases from there until he recognizes that God is the Sustainer of everything, so His interaction with the creation is characterized by the best of manners. (Exemplifying this), the Prophet said: “My Lord taught me good manners, and He gave me the best of manners.”

Principle 10: Know what one should be occupied with.

Know what one should be occupied with, both internally and externally for whoever thinks that he is not in need of obeying [God and His messenger] is a broke man who is in opposition to God’s words: “…Say ‘If you love Allah, then follow me, Allah will love you’” (Aal `Imran: 31)

This is the foundation upon which have been built castles like no other.