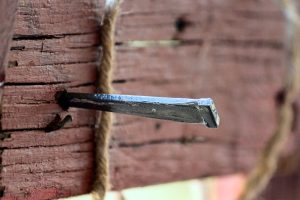 “And because they said: We slew the Messiah, Jesus son of Mary, the messenger of God. But they did not slay him, nor did they crucify him, for only a likeness of him was shown to them. Those who disagree concerning it surely are in doubt regarding him. They have no knowledge of him, but only follow surmise. And it is certain that they did not slay him! No indeed, God raised him up to Himself. God is All-Mighty, All-Wise.” (An-Nisa’ 4:157)

“And because they said: We slew the Messiah, Jesus son of Mary, the messenger of God.”

This is because the Jews asserted this. It is however also possible that the Jews said this only scornfully as is the case in a similar situation with the words of Pharaoh concerning Moses,

and that God took up this assertion of the Jews again in order to praise Jesus or to replace their evil account with a good one.

“But they did not slay him, nor did they crucify him, for only a likeness of him was shown to them.”

It is related that a group of Jews insulted Jesus and his mother, whereupon Jesus appealed to God against them. When God turned them into monkeys and swines the Jews came to an agreement to kill Jesus. Then God informed Jesus that He would raise Jesus to heaven, so Jesus said to his disciples, “Who among you will agree to take a form similar to mine and die in my place and be crucified then go straight to heaven?” A man among them offered himself, so God changed him into a form to look like Jesus and he was killed and crucified.

Others say that a man pretended to be a believer in front of Jesus and then went away denouncing him, whereupon God changed this man into a form similar to that of Jesus, and then he was seized and crucified.

Still, others say that the Jew Titanus entered a house where Jesus was, with a treacherous intention, but could not find him. Then God changed him into a form similar to Jesus and when he came outside people thought he was Jesus and so they seized and crucified him.

Similar unusual things which one may not find improbable for the time of the Prophets have been reported on this subject.

When God blames the Jews (in this context), it is only because their words showed that they acted impudently towards God, wishing to kill his Prophet in spite of the confirmation of the Prophethood of Jesus through overwhelming miracles (mu`jizat) and furthermore they rejoiced in doing so.

“Those who disagree concerning it … ”

That is concerning the state in which Jesus was. For as soon as this event (the crucifixion of another person in Jesus’s place) occurred, the people disagreed concerning it. Some Jews said, “Jesus was a liar when he said God would raise him up to heaven, for we certainly killed him!” Others hesitated, and some of these said, “If this crucified person is Jesus, then where is our companion who wanted to betray him?” Others said, “That is the face of Jesus, but the body is that of our companion.” Those, however, who had heard Jesus when he said, “God will raise me up to heaven,” said, “He was raised into heaven.”

In the hadith, it is reported that Jesus will come down over a mountain in the Holy Land called Afiq and in his hand he will carry a spear with which he will kill the antichrist (dajjal) (see also the false Christ in Matthew 24:24 which in Syriac is mshihe daggale). He will then go to Jerusalem (bayt al-muqaddas) just when the inhabitants are performing the morning prayer. The imam (leader of the prayer) will want to step back (in view of Jesus’ appearance and let him lead) but Jesus will give him precedence to perform the prayer behind him. Then he will kill the swine, dash to pieces the crucifix, demolish the churches and synagogues, and kill the people who do not have the correct belief of him.

The general Muslim view of Jesus is as follows:

He was born of the Virgin Mary (Maryam in Arabic – see the chapter by that name in the Qur’an for further details);

He was, by the Mercy of Allah, able to perform miracles (see Qur’anic and hadith references);

To him was revealed the Injil (see Qur’anic and hadith references – n.b. the Injil in NO WAY constitutes what is today known as the New Testament);

Jesus was raised to heaven – he did not die on the cross; and

Jesus will return as the Messiah – this does not mean that we raise the status of Jesus to me more than that of a man as Jesus, like Moses, Noah, Muhammad, Abraham, Yunus, etc., peace be upon them all, were all Prophets and we do not distinguish between them.

May Allah, the Almighty, have mercy and protect us from the evil of ourselves, the evil of shaytan (Satan), and the evil of Satan’s partnership.

Al-Baydawi (d. 685H), a Qur’anic exegetist, wrote the text, Anwar at-Tanzil wa Asrar at-Tawil (The Lights of Revelation and the Secrets of Interpretation) more commonly known as Tafsir Al-Baydawi. He took from earlier works such as those by Zamakhshari and expanded them, subsequently, his work is considered to be amongst the best commentaries on the Qur’an.