The Serenity and Happiness of Believers (Part 1/2) 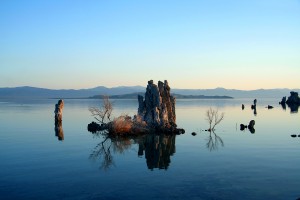 When Allah mentions someone He bestows him with happiness, optimism and tranquility:

“…And establish prayer. Indeed, prayer prohibits immorality and wrongdoing, and the remembrance of Allah is greater.” (Al-`Ankabut 29: 45)

First, prayer enjoins self prohibition; this self restraint is considered innate in religion, yet the deterrent has external origins.

Some scholars said that the remembrance of Allah is the greatest component of Salat (prayer). However, Ibn Abbas (may Allah be pleased with him and his father) says:

“The remembrance of Allah to you when you pray is greater than your remembrance of Him in the same prayer, since when one worships Him he fulfills the duty of worshiping, while when Allah remembers you, He grants you peace.”

“So which of the two parties has more right to security, if you should know? They who believe and do not mix their belief with injustice – those will have security, and they are [rightly] guided.” (Al-An`am 6: 81-82)

Serenity is one of the Fruits of Prayers:

Among these endowments that Allah grants is that His remembrance in prayers grants you serenity. What is serenity? This word came in the Qur’an in several verses, the most prominent of which are:

“It is He who sent down tranquility into the hearts of the believers that they would increase in faith along with their [present] faith.” (Al-Fath 48: 4)

“Certainly was Allah pleased with the believers when they pledged allegiance to you, [O Muhammad], under the tree, and He knew what was in their hearts, so He sent down tranquility upon them and rewarded them with an imminent conquest.”(Al-Fath 48: 18)

There is no happiness without serenity and no serenity without faith.

Serenity is the Ultimate Objective of a Sane Life

Serenity flourishes and thrives without any help from money or materialistic resources. You might be poor, yet Allah bestows you with serenity so that you achieve happiness even if you lose everything else, and you fall into misery by losing it even if you owned everything else. Serenity doesn’t need good health either; one could suffer sicknesses yet Allah bestows serenity in his heart.

The greatness of this religion, the religion of all mankind, the religion of any human, is that there is no division into castes. There is no elite, and this serenity is for everybody. The only condition is paying its price. Without serenity, any blessing will turn into a curse: money is a blessing that can turn into a curse if it is possessed by a person deprived from serenity. At the same time, every hardship surrounded by serenity can turn into a blessing: a serene person can sleep comfortably on a thorn-covered bed, while a troubled person won’t find comfort in a silk-covered bed.

A serene person perceives the hardest matters as lenience and ease, while a non serene person sees the easiest matters as hardship and distress. The fight of fears and dangers along with serenity ends up as security and peace while an easy journey without serenity turns to ruins and desolation.

Serenity for the Prophets

This serenity is not pricey for the seeker, whoever he might be, regardless of time and space, in any state or outcome.

Our prophet, peace be upon him, and his companion, Abu Bakr, found it in the cave when they were followed by their enemies; and every believer is meant to find it whenever he turns to his lord giving up in everything else except Him, and whenever he turns only to His door apart from all the other doors.

The Serenity of the Soul is the First Source of Happiness

When Allah bestows serenity on the believer, He extends his livelihood; then at once living becomes a delightful pleasure, prosperous and abundant. It becomes profusion in this worldly life and provision for the hereafter. However, without serenity, even an extensive provision can become a source of anxiety and fear or envy and hatred, and it could be accompanied by deprivation (out of avarice or sickness) or by ruin (out of intemperance or disregard).

A serene believer granted with posterity would see it as a beautiful adornment of this worldly life and a source of delight, rejoice and multiplication of the reward in the hereafter. But, if Allah holds His mercy, posterity becomes scourge, glumness, sufferance, misery and wakefulness in the night and exhaustion in the day.

A serene believer would consider health and wellness as a gift and blessing from Allah with which he lives a good life. However, a non serene person will turn this gift into a curse by spending it in what destroys the body, corrupts the soul and amplifies evil till the Day of Judgment.

With serenity, wealth and power are a tool of reform, a source of security and a modality of saving the good deeds. Once the serenity is taken out, wealth and power turn out to be a source of anxiety, tyranny, despotism, abomination and hatred. They no longer allow their holder to reach a peaceful resort, and they become a means through which a huge place in hell fire is guaranteed.

A serene soul is the first source of happiness; however, how could it be reached when it’s not the fruit of intelligence, knowledge, health, strength, money, wealth, celebrity, power… or anything else from the blessings of this worldly life.

Serenity has only one source, which is the belief in Allah and the Day of Judgment; it’s the deep truthful belief that is untroubled by doubt and uncorrupted by duplicity. It’s a belief combined with a proper way of action. We have evidences for that in the actual present, and the rich history, and in what every fair person might find tangible in oneself and in the others around him.

Life taught us that the most anxious, narrowed, turbulent, futile and lost, are the ones deprived from the grace of faith and from the comfort of certainty.

Their life is tasteless even if it’s full of delights and flavors. They don’t grasp its meaning and don’t seize its goal. I heard a story about one of the five greatest architects who designed the first bridge of Istanbul crossed by 300,000 cars daily. During the opening ceremony, that architect threw himself in the Bosporus and died. A letter was found in his room where he wrote: “I tasted everything in this life and found it tasteless, and so I wanted to taste death.”

O brothers, this is a telling story: a man without a life objective is futile even if he was rich, strong, healthy, handsome; smart… the life of this kind of man is pointless and unsustainable. Allah, may He be glorified, forbids for this life to provide man with a lasting happiness; rather, it provides people with a decreasing happiness.

Serenity is a Fruit from the Tree of Faith and Monotheism

Because you are a Muslim connected to Allah, you enjoy features that only Allah knows, mainly moral features: confidence in Allah’s satisfaction, confidence in His love, confidence that if this worldly life was worthy a mosquito wing Allah wouldn’t allow a disbeliever to take a sip of water from it, and confidence that Allah promised you a garden as wide as the heavens and earth:

“Then is he whom We have promised a good promise which he will obtain like he for whom We provided enjoyment of worldly life [but] then he is, on the Day of Resurrection, among those presented [for punishment in Hell]?” (Al-Qasas 28:61)

Pingback: The Serenity and Happiness of Believers (Part 2/2)