There Will Come Light 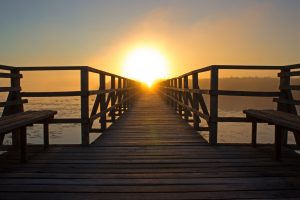 In a recent khutbah, I heard Allah’s divine name, Al-`Afoo, The Pardoner, and a very touching qudsi hadeeth that exemplified it:

This is no free ticket to sin as you please. But it did make me realize we should always have hope that Allah will forgive our sins and guide us to become better Muslims.

How many times have we sat down to count our mistakes and recognized we’ve sinned so much we can’t even keep track anymore? We think that there’s no way Allah can forgive us now. To our minds, we don’t even deserve forgiveness.

Take note. Hope is no luxury to make our lives better. It is a Muslim obligation, part and parcel of faith.

At All Points, Hope

Having established that we cannot despair of Allah’s mercy, we need also to understand that despair, in any form, is not acceptable in a Muslim’s life.

When life is at its worst, a sinister feeling in the pit of the stomach, growing and spreading and inching its way toward your heart, may threaten to take over. Financial burdens, work woes, and relationship troubles look like the pinnacle of all problems. How will we recover from excessive debt, a layoff, or divorce? The future stares back, bereft of hope, and looks pretty ugly. The temptation to give up grows strong, and bed seems a nice place to lie down for a long time (covers overhead!) thinking about nothing at all.

Despair has set in. And its downhill from there-unless something’s done quickly to free us from it. So here are some stories to keep that despair at bay.

Among the very best hope narratives is the Qur’an’s account of Prophet Moses. What could be more distressing than an enemy army hot on your heels with nothing but sea in front of you? “Then when the two multitudes saw each other, Moses’ companions said: ‘Indeed, we are most surely overtaken.’ (Moses) said: ‘No, indeed! Most surely, my Lord is with me! He will guide me!’” [Ash-Shu`ara’ 26:61-62]

In the same dramatic straits, most of us would succumb to feelings of utter helplessness. Our hearts would see no purpose in even “the hope” for a way out. Yet all along it was there, with Allah. He told Prophet Moses: “Strike the sea with your staff! Thus it split, so that each divide became as a great mountain.” [Ash-Shu`ara’ 26:63]

Who could have imagined such an escape? We may not always see the exodus from a problem. But Allah does, for He is the One who creates it.

Consider also the story of Prophet Yunus (Jonah). Trapped in the belly of the whale in the midst of the sea, he still did not lose hope in Allah’s mercy. He prayed with unfailing constancy. And from him we learn one of the greatest duaa: “There is no God but You! Highly exalted are You! Indeed, I was of the wrongdoers!” [Al-Anbiya’ 21:87]. It is because of his hope, and the deep sincerity of his prayer, that Allah saved him. “Yet were it not that he was one who highly exalted [God alone], he would have remained in its belly until the Day all are raised up.” [As-Saffat 37:143-144]

What of our own beloved Prophet Muhammad, peace be upon him? He walked to the mountain city of at-Taif to bestow them with divine guidance. But its people belied him and ran him out with stones.

Allah sent an angel with a question to the Prophet, peace be upon him. Did he desire to bring at-Taif’s twin mountains down upon it? The Prophet refused. He had hope that one day they or their children would enter into Islam.

The prophetic narratives of the Qur’an tell us something vital. In their bleakest hours, the hope of the prophets held unshakable, for they issued directly from mighty faith. Despair is not a Muslim option. Our own woes will never gather the weight of the prophets’. Nor shall our troubles mount to such heights. In that, let us take due comfort.

Think of the nature of night and day. The darkest hour comes just before dawn. So when life looms gloomy, and you feel as though you’re groping in total darkness, know that new light lingers just over the near horizon.

Article provided by Al Jumuah Magazine, a monthly Muslim lifestyle publication, which addresses the religious concerns of Muslim families across the world.