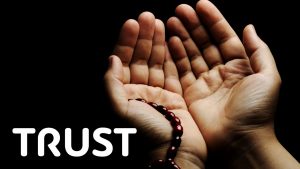 Amanah (i.e. Trust) can be defined as one of the ethical and moral branches of the love for right and altruism; it is the opposite of treachery and treason.

Trust is a firm moral or character by which man abstains from taking what is not his own right even if conditions were befitting and condemnation was not likely. It also stands for carrying out what is obligatory or dutiful on one such as to give out what belongs to others even if one could abstain from doing this without being persecuted or condemned in any way.

“O ye who believe! Betray not Allah and His Messenger, nor knowingly betray your trusts.”(Al-Anfal 8: 27)

“Lo! Allah commandeth you that ye restore deposits to their owners, and, if ye judge between mankind, that ye judge justly. Lo! comely is this which Allah admonisheth you. Lo! Allah is Ever Hearer, Seer.” (An-Nisa’ 4: 58)

“Lo! We offered the trust unto the heavens and the earth and the hills, but they shrank from bearing it and were afraid of it. And man assumed it. Lo! He hath proved a tyrant and a fool.” (Al-Ahzab 33: 72)

Trust, from the Divine Legislator’s viewpoint, has a wide range of meanings. It refers to a variety of different connotations which revolve around the responsibility feeling a person finds in himself in all that he is assigned or asked to carry out and his firm belief that he would be held responsible before his Lord in both this present life and the hereafter for every act and action he has ever done. This has been thoroughly explained in the Prophet’s hadith that reads:

Ibn ‘Umar reported that he heard the Messenger of Allah, may Allah bless him and grant him peace, say, “All of you are shepherds and each of you is responsible for his flock. A woman is the shepherd of the house of her husband and she is responsible as is the servant in regard to his master’s property.” (Narrated by Al-Bukhari)

Amazingly, the common people restrict the meaning of Trust to one of its least meanings and connotations which is to keep deposits and trusts and restore them to their owners, though it is much more than that as deemed by the true religion of Islam; the religion of the Creator of the whole universe and beyond.

When the ultimate happiness is for man to be safe from hardship in this present life and the bad outcome in the hereafter, Prophet Muhammad (Peace and blessings be upon him) used to seek refuge in Allah the Almighty from these two states or conditions in the following hadith:

Abu Hurairah (May Allah be pleased with him) reported: The Messenger of Allah (Peace and blessings be upon him) used to supplicate: “Allahumma inni a’udhu bika minal- ju’i, fa-innahu bi’sad-daji’u; wa a’udhu bika minal-khiyanati, fa- innaha bi’satil-bitanah‘ [O Allah! I seek refuge in You from hunger; surely, it is the worst companion. And I seek refuge in You from treachery; surely, it is a bad inner trait].” (Narrated by Abu Dawud). As hunger is the waste of life and treachery is the waste of faith.

It is well known that the Prophet (Peace and blessings be upon him) in his early life onward was called by his own people as “The Trustworthy”. In the same vein, Prophet Musa (Moses) (Peace and blessings be upon him) was characterized by trust and honesty when he helped the two daughters of the pious man in watering their flock, respected them as human beings and as women, and was perfectly chaste in treating them. Allah the Almighty says,

“So he watered (their flock) for them. Then he turned aside into the shade, and said: My Lord! I am needy of whatever good thou sendest down for me. Then there came unto him one of the two women, walking shyly. She said: Lo! my father biddeth thee, that he may reward thee with a payment for that thou didst water (the flock) for us. Then, when he came unto him and told him the (whole) story, he said: Fear not! Thou hast escaped from the wrongdoing folk. One of the two women said: O my father! Hire him! For the best (man) that thou canst hire is the strong, the trustworthy.” (Al-Qasas 28: 24-26)

This took place before Musa was made prophet by Allah the Almighty and before he was sent to Pharaoh to guide him and his people to the Straight Path of Allah the Almighty. This is not surprising in any way, as the Prophets of Allah are all chosen from among the noblest human beings and the perfect ones among all mankind. Basically, a self that sticks to virtue though it suffers from hunger and alienation is a self of a strong and virtuous man.

Finally, keeping the rights of Allah and His servants requires firm ethics and morals that do not change with the change of time regardless of its vicissitudes; this is the essence of Trust!