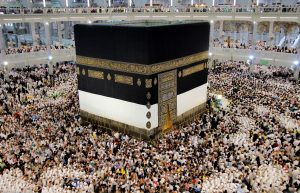 Those who did not perform Hajj witnessed blessed days and lived virtuous hours; namely the first ten days of Dhul-Hijjah.

The season of Hajj is a noble season. People during this season are either a pilgrim performing Hajj or one who is not. The pilgrim witnessed the holy sites; he stood at ‘Arafah supplicating Allah Almighty and humbling himself, returned to Muzdalifah and witnessed Al-Mash‘ar Al-Haram remembering Allah, the Exalted, and invoking sincerely. Allah Almighty says (what means):

“But when you depart from ‘Arafat, remember Allah at Al- Mash‘ar Al-Haram. And remember Him, as He has guided you, for indeed, you were before that among those astray.” [Al-Baqarah 2:198]

He threw the Jamrah of Al-‘Aqabah and remembered Allah while throwing, then he slaughtered the hady (sacrificial animal) of his tamattu‘. Allah Almighty says (what means):

“And when you are secure, then whoever performs ‘Umrah [during the Hajj months] followed by Hajj [offers] what can be obtained with ease of sacrificial animals.” [Al-Baqarah 2:196]

Then, he shaved his hair:

“And do not shave your heads until the sacrificial animal has reached its place of slaughter.” [Al-Baqarah 2:196]

and performed tawaf (circumambulation) around the Ancient House responding to the call of Allah (which means):

“Then let them end their untidiness and fulfil their vows and perform tawaf around the Ancient House.” [Al-Hajj 22:29]

He stayed in Mina on the days of tashreeq to complete his rituals and threw pebbles at the jamrat (pillars) therein following the example of Prophet Ibrahim, may Allah exalt his mention. The last thing he did was perform the farewell tawaf in compliance with the command of the honored Prophet (Peace and blessings be upon him) who said, “No one of you should leave until the last thing he has done is circumambulate the House.” [Muslim]

Hajj consists of rituals and emotions experienced by the Muslim being immersed in enslavement to Allah between compliance with His orders, applying His sharia and following the Sunnah of His Prophet (Peace and blessings be upon him) in performing the rituals of the Hajj. The Messenger of Allah (Peace and blessings be upon him) said, “Learn from me your rituals (by watching me performing them).” [Muslim]

He is continuously mentioning Allah and sincerely supplicating Him. The pilgrim, from the time he enters the state of ihram (ritual consecration) till he throws the jamrah of Al-‘Aqabah, continues to recite talbiyah: “Labbayka Allahumma Labbayk, Labbayka la Shareeka laka Labbayk, Inna Al-Hamda wan-Ni‘mata laka wal-Mulk La Shareeka Lak.” (O Allah! I respond to You in obedience. You Have no partner. I respond to You in obedience. All praise and grace belong to You and the Sovereignty too; You Have no partner.)

In addition, he moves between the rituals; supplicating Allah and resorting to Him. In ‘Arafah, the great place of standing, and Muzdalifah, the honored mash‘ar, nobody is guided to supplication therein except that he will be answered, as mentioned by the scholars. The same applies to performing tawaf, performing sa‘y between As-Safa and Al-Marwah, and throwing pebbles, which are appropriate occasions for supplicating Allah and resorting to Him. In brief, all of the Hajj, with all its places and rituals, is appropriate for remembrance and supplication. Allah Almighty says (what means):

“That they may witness benefits for themselves and mention the name of Allah on known days.” [Al-Hajj 22:28] and (what means):

Besides, the Messenger of Allah (Peace and blessings be upon him) said, “Performing tawaf round the House (the Ka‘bah) and sa‘y between As-Safa and Al-Marwah are meant for the remembrance of Allah.” [Abu Dawood, At-Tirmithi]

Then, Allah concluded the rituals of the Hajj with a command to remember Him with the greatest possible remembrance. Allah, the Exalted, says (what means):

“And when you have completed your rites, remember Allah like your [previous] remembrance of your fathers or with [much] greater remembrance.” [Al-Baqarah 2:200]

Allah prescribed this order after Hajj in order for the Muslim to continue to adhere to uprightness and righteousness and to proceed on the way of piety and success. This is the state of the pilgrim while performing his Hajj to the House of His Lord.

A person whose state was like that during those specified days better, after his Hajj, continue to do what he used to do during the Hajj. This includes remembering Allah, humbling himself with enslavement to Him during the Hajj, and being keen on following the Sunnah of His Messenger (Peace and blessings be upon him) and his guidance in spite of the hardships and discomfort that one encounters during the Hajj.

Without such hardships and discomfort, one should be even keener on absolute compliance and perfect enslavement to Allah, the Exalted, along with caution against anything that contradicts this, just as he was cautious during his Hajj against committing any restrictions or prohibitions that would affect or reduce the reward of his Hajj.

On the other hand, those who did not perform Hajj witnessed blessed days and lived virtuous hours; namely the first ten days of Dhul-Hijjah. Ibn ‘Abbas, may Allah be pleased with them, narrated that the Prophet (Peace and blessings be upon him) said, “There are no days in which righteous deeds are more beloved to Allah than these ten days.” [Al-Bukhari]

Fasting on the day of ‘Arafah is equal to fasting a previous and a coming year, as narrated by Muslim on the authority of Abu Qatadah, may Allah be pleased with him. Moreover, the Day of Nahr is the greatest day of the Hajj, as mentioned by the Prophet (Peace and blessings be upon him) “The greatest day of the Hajj is the Day of Nahr.” [Abu Dawood, Ibn Majah, Al-Bukhari]

On that day, we offer the sacrifice that Allah ordered us to sacrifice by virtue of the verse in which He says (what means):

The Prophet (Peace and blessings be upon him) sacrificed two horned rams, as narrated by Al-Bukhari and Muslim on the authority of Anas.

Furthermore, on the days of tashreeq, both the pilgrim and the non-pilgrim should remember Allah all the time, and especially after obligatory prayers. Nubayshah Al-Huthali, may Allah be pleased with him, narrated that the Prophet (Peace and blessings be upon him) said, “The days of tashreeq are days of eating and drinking.” and in another narration: “and remembering Allah Almighty.” [Muslim]

It was said to Imam Ahmad  may  Allah  have  mercy  upon  him: “Relying upon which hadith do you adopt the opinion that takbeer (saying ‘Allahu Akbar’ – Allah is the Greatest) should start from after Fajr prayer of the day of ‘Arafah till the end of the days of tashreeq?” He replied, “Upon the consensus of ‘Umar, ‘Ali, Ibn ‘Abbas and Ibn Mas‘ood, may Allah be pleased with them.” [Al-Mughni]

Since the Muslim, on those blessed days, moves between remembering Allah, slaughtering the sacrifice for Him, and fasting, then it is only appropriate that these acts of worship should discipline his behavior and train him to continue to adhere to obedience thereafter. Worshipping Allah, the Exalted, is not associated with a certain time or place; rather, all the time of man should be devoted to obeying and pleasing Allah. Allah Almighty says (what means):

“Say: Indeed, my prayer, my rites of sacrifice, my living and my dying are for Allah, the Lord of the worlds. No partner has He. And this I have been commanded, and I am the first [among you] of the Muslims.” [Al-An’am 6:162-163]

Then, my dear brother and sister, O you who witnessed those virtuous days, did you leave them in a condition better than your condition before them so that you rejoice at the bounty and mercy of Allah, who says (what means):

“Say, “In the bounty of Allah and in His mercy – in that let them rejoice; it is better than what they accumulate.”” [Yunus 10:58]

Or did you leave them just as you entered them, as if you did not perform Hajj and was not accepted, or as if you did not fast and slaughter; thereupon (if that is the case), you should weep for your sins and ask your Lord for forgiveness for your shortcomings and misdeeds. If you do not win in the good seasons and virtuous days, then when will you win?