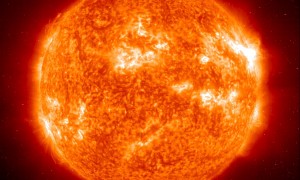 All the verses in Surat ash-Shams end in the letters He and Elif. The letter H stands for hydrogen and He for helium. No other Surah in the Qur’an ends in the letters HE in every verse from beginning to end.

The Sun is made up of 70% hydrogen (H) and 28% helium (He) atoms.1 Other substances make up less than 2%. Six hundred million tons of hydrogen are converted into 596 million tons of helium in the Sun every second. The remaining 4 million tons is given off as heat and light energy.2

In that sense, the first thing that comes to mind when the Sun is mentioned is the letters H (hydrogen) and He (helium) that stand for the Sun. All the 15 verses in Surat ash-Shams of the Qur’an (Shams meaning ‘Sun’), end in the letters H and E. The Arabic equivalent of these letters are:

(The Arabic letter He)

The Arabic form of the verses in Surat ash-Shams and the final letters thereof can be seen below: 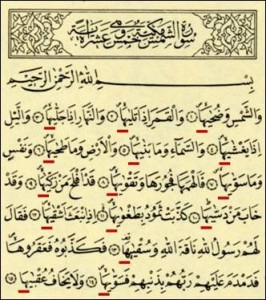 As can be seen, all the verses in Surat ash-Shams end in the letters He and Elif. The letter H stands for hydrogen and He for helium. No other Surah in the Qur’an ends in the letters HE in every verse from beginning to end. It is therefore extremely striking how only this Surah in the Qur’an ends in such a sequence of letters. Surat ash-Shams’s number, 91, is also highly significant. Apart from hydrogen, there are 91 other elements in the Periodic Table, and these are made up of hydrogen elements. To put it another way, all atoms. From hydrogen, the lightest element, to the heaviest are intra-atomic combinations of hydrogen atoms. For that reason, the H (hydrogen) atom in the Sun makes up the other 91 elements in nature.3

Almighty Allah has created all the details in nature and is still creating them. All our knowledge about such details is permitted to us in order for us to comprehend the omniscience of our Lord. In one verse, we are told:

“Allah, there is no god but Him, the Living, the Self-Sustaining. He is not subject to drowsiness or sleep. Everything in the heavens and the earth belongs to Him. Who can intercede with Him except by His permission? He knows what is before them and what is behind them but they cannot grasp any of His knowledge save what He wills. His Footstool encompasses the heavens and the earth and their preservation does not tire Him. He is the Most High, the Magnificent.” (Al-Baqarah 2: 255)

3 http://periodic.lanl.gov/elements/1.html; William D. Harkins, “The Abundance of the Elements in Relation to the Hydrogen-Helium Structure of the Atoms”, Proceedings of the National Academy of Sciences of USA, April 1916, Vol. 4, pp. 216–224.