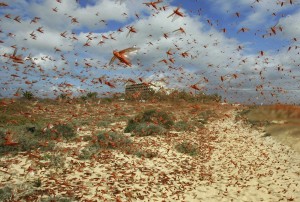 “They will emerge from their graves with downcast eyes, like swarming locusts.” (Al-Qamar 54:7)

This verse describes all people’s situation in the Hereafter as one resembling swarming locusts. There is great wisdom in this simile.

A great deal of information was obtained about locusts in the twentieth century by conducting wide-ranging studies using micro-cameras. Locust swarms contain huge numbers of individual locusts that behave as a single body. Coming together in swarms that are kilometers long and wide, they look just like a dark cloud. It has been established, for instance, that a single swarm of desert locusts can cover 1,200 square kilometers (460 square miles) and contain between 40 and 80 million locusts per square kilometer.1

In addition, they deposit their eggs in sandy soils like seeds and, after the larvae have remained underground for a long period of time, they all emerge together. After digging a 10-15 cm-long tunnel in the ground, a female locust lays 95-158 eggs at once. Females can lay eggs at least three times in their lifetime. When the larvae have matured after 10-65 days, depending on the air temperature, they emerge in a large group. Up to 1,000 egg pods have been found in one square meter. Locust swarms are large enough to cover several hundred square kilometers, with the number of adult locusts per square kilometer varying from between 40 to 80 million.2 Their long underground existence and sudden emergence in vast numbers all at the same time may resemble the resurrection of human beings on the Day of Judgment. (Allah knows best.)

Today, locusts are being studied by special units, which employ remote control imaging systems. Even NASA satellite data are used to identify areas in Africa where desert locust colonies have developed. Thanks to satellite data, it is possible to carry out wide-ranging research on land and in space over an 18 million square kilometer area.

As we have seen, the fact that the Qur’an made such a comparison at a time when these technologies did not exist is one of the proofs that it is the revelation of the Omniscient Allah.