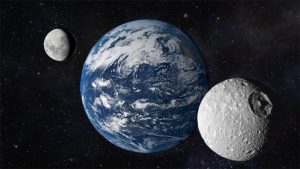 The moon goes around the earth Moon

The word “Qamar,” referred to as a heavenly body in the Qur’an and meaning “Moon” appears 27 times. The elliptical orbit of the Moon around the Earth also takes 27 days. But this is not a number that someone looking from Earth could determine. Because since there is a 29-day between full moons, it used to be thought it took the Moon 29 days to travel around the Earth.

The fact is, however, that as the Moon revolves around the Earth, the Earth is also traveling around the Sun. Because of the movement of the Earth, the Moon completes its orbit with a 2-day delay. This is another reference in the Qur’an consistent with modern astronomical findings. (Allah knows the truth.) 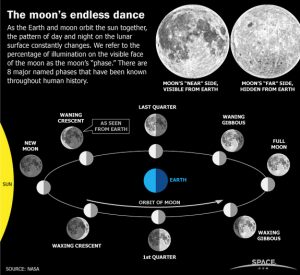 “And the moon. We have measured for it mansions. Till it returns like an old curved palm tree branch.” (Ya-Sin, 36: 39)

The moon orbits earth in 27 days, 7 hours, 43 minutes and 11 seconds. The Arabic word “qamar” meaning “moon” is used 27 times in the Quran (The miraculous character of this shall be dealt with in the coming pages.). The moon’s orbit around the earth traces a sinuosity. While the earth travels around the sun, the moon revolves around the earth in a variable orbit, tracing a curvature, a sinuosity, a spiral. The same face is always presented to the earth. The curve it traces is reminiscent of a curved branch. The Arabic word used to designate the orbit of the moon is “urjun,” the curved palm tree branch. This branch is qualified by the attribute “old” that denotes a thinner and more curved branch. The simile beautifully describes the orbit traced by the moon about the earth.

As the moon orbits around the earth, it has a sinuous orbit that looks like an old curved palm tree branch. The illustration here demonstrates the moon’s orbit through space. (Source: http://www.quranmiracles.com/2011/03/the-orbit-of-the-moon/)

You may also read: