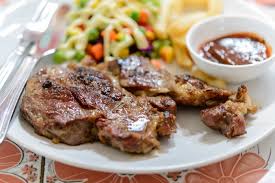 “He has only forbidden you carrion, blood and pork and what has been consecrated to other than Allah. But anyone who is forced to eat it-without desiring it or going to excess in it-commits no crime. Allah is Ever-Forgiving, Most Merciful.” (Al-Baqarah 2:173)

Eating pork is harmful to health in a great many regards. This harm still persists today, despite all the precautions that are taken. First and foremost, no matter how clean the farms and environments on which it is raised may be, the pig is not by nature a clean-living animal. It often plays in and even eats, its own excrement. Due to this and its biological structure, the pig produces much higher levels of antibodies in its body than other animals.

In addition, far higher levels of growth hormone are produced in the pig compared to those in other animals and human beings. Naturally, these high levels of antibodies and growth hormone pass across to and collect in the pig’s muscle tissue. Pork meat also contains high levels of cholesterol and lipids. It has been scientifically proven that these significant amounts of antibodies, hormones, cholesterol and lipids in pork represent a serious threat to human health.

The existence of above-average numbers of obese individuals in the populations of countries such as the USA and Germany, in which large quantities of pork are consumed, is now well-known. When exposed to excessive quantities of growth hormone as a result of a pork-based diet, the human body first puts on excessive weight and then suffers physical deformations.

Another harmful substance in pork is the “trichina” worm. This is frequently found in pork and when it enters the human body, it settles directly in the muscles of the heart and represents a possibly fatal threat. Even though it is now technically possible to identify pigs that are infected with trichina, no such methods were known in earlier centuries. That means that everyone who ate pork risked infection by trichina and possible death.

All these reasons are just a part of the wisdom in our Lord’s prohibition on the consumption of pork. Moreover, this commandment of our Lord’s provides complete protection from the harmful effects of pork under any conditions.

Until the 20th century, it was impossible to be aware of the danger posed to human health by pork. The fact that the Qur’an revealed fourteen centuries ago, warns against this harm which has been incontrovertibly revealed with modern medical equipment and biological tests, is one of the miracles demonstrating that the Qur’an is the revelation of Allah, the Omniscient.

Despite all the precautionary measures and inspections that take place in modern-day pig rearing, the fact that pork is physiologically incompatible with the human body and is a variety of meat harmful to human health has not altered.

Taken with slight editorial modifications from miracles of the Qur’an website.