Quitting Smoking: A Story Worth Telling 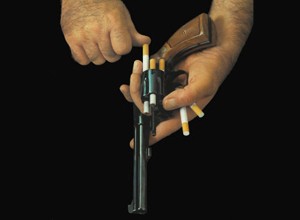 Smoking is the top cause for lung cancer, responsible for 75% of chronic bronchitis and emphysema, and 25% of ischemic heart diseases.

Khalid Metwali has been smoking most of his life. He has smoked for 34 of the 49 years of his life, and had tried many times to quit but relapsed and returned to smoke even more vigorously every time.

“I used to smoke around 30 to 40 cigarette per day, but lately I noticed that I have been losing my health gradually.” Metwali said. “I used to wake up every night with a bad cough, and when I walked I got tired really quickly.”

According to World Health Organization (WHO) statistics, smoking is the top cause for lung cancer. It is responsible for 75% of chronic bronchitis and emphysema, and it is also responsible for 25% of ischemic heart diseases.

A new study presented at the Canadian Stroke Congress shows that smokers are not only more susceptible to having strokes, but are also getting them earlier than non-smokers by almost a decade.

The researchers studied 982 patients diagnosed with stroke during 3 years, around 25% of them were smokers. They found that the patients who smoke were almost 10 years younger than the non-smoking patients.

The study authors referred that smoking form fragments inside the arterial blood vessels’ walls causing atherosclerosis. Smoking also facilitates the formation of the clots that cause strokes. Researchers also warned that people who had minor strokes are 10 times more likely to have major ones, especially if they continued smoking.

In another study conducted by Dr. Mike Sharma and Dr. Robert Reid at The Ottawa Hospital, it was found that smokers are twice as likely to have ischemic stroke and four times at risk to have hemorrhagic stroke.

Smoking not only alters your health, but also disturbs your social life as well. Maha Ahmed, Metwali’s wife, recalled how he was so dependent on his addiction to smoking, and how that got to her nerves.

“I was so upset when we are in a family gathering or in an emergency in a hospital and he has to leave us to go and smoke a cigarette or to buy a new pack,” she exclaimed sadly.

Recently, Metwali has quitted smoking. He took into consideration how his daughters began to criticize him for smoking.

”It was obvious that they did not like it, and I did not have anything to say. When they asked me whether it is right or wrong to smoke, I definitely said it was wrong, which was very confusing for them.” 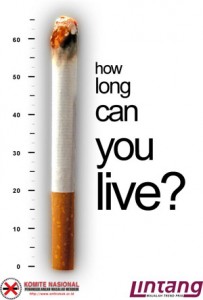 Beside health and social burden, smoking was an economical issue for Metwali’s family.

“I was spending between LE350 to LE400 (US$58 to US$66) to buy cigarettes,” Metwali admitted. “It was really hard to spend that money on such a waste like cigarettes while there are more important things to spend this money on.”

But now Metwali has stopped smoking. Since then, he wakes up every morning feeling active and healthy, and believes he has never been happier.

Which would not be a surprise to Dr. Andrew Pipe of the University of Ottawa Heart Institute. His study shows that if a person stops smoking, its risk for stroke or heart disease decreases. Within 18 months to two years of quitting, the risks of stroke are about the same as for non-smokers, he argues.

“I quit smoking with the help of a drug containing varenicline. It helped me hate the habit itself, as I was getting dizzy when I smoked,” Metwali said.

“I’ve spent the first 10 days having withdrawal symptoms which were not easy at all, but when I look at myself now and look back, I think it was definitely worth it.”

Ola Al-Ghazawy is freelancer science journalist based in Egypt, with a degree in Pharmaceutical Sciences.