The Skies with “Woven” Orbits

By Miracles of the Quran.com 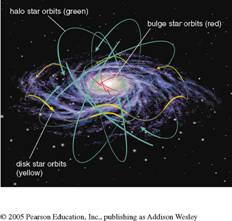 The picture above shows some of the complex movements of stars.

The Arabic word “alhubuki,” translated as “furnished with paths” in verse 7 of Surat adh-Dhariyat, comes from the verb “hubeke,” meaning “to weave closely, to knit, to bind together.” The use of this word in the verse is particularly wise and represents the current state of scientific knowledge in two aspects.

The first is this: The orbits and paths in the universe are so dense and intertwined that they constitute intersecting paths, just like the threads in a piece of fabric. The Solar System we live in is made up of the Sun, the planets and their satellites and heavenly objects in constant motion such as meteors and comets. The Solar System moves through the galaxy known as the Milky Way, which contains 400 billion stars.(1) It is estimated that there are billions of galaxies. Celestial bodies and systems revolving at speeds of thousands of kilometers an hour move through space without colliding with one another.

The science of astronomy was developed with the aim of mapping the positions and courses of stars, while astro-mechanics was developed in order to determine these complex motions. Astronomers used to assume that orbits were perfectly spherical. The fact is, however, that heavenly bodies are known to follow mathematical shapes, such as spherical, elliptical, parabolic or hyperbolic orbits. Dr. Carlo Rovelli of the University of Pittsburgh says, “Our space in which we live is just this enormously complicated spin network.”(2) 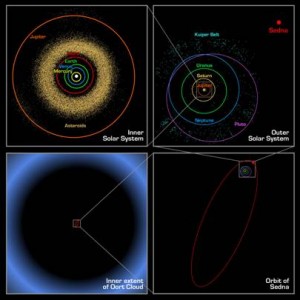 The orbits of some of the bodies in the Solar System. Based on this picture and looking clockwise, it can be seen that the Solar System itself is part of even greater orbital movements.(3)

The second aspect is that the description in the Qur’an of the sky using a word meaning “woven” may be a reference to the String Theory of physics. (Allah knows the truth.) According to this theory, the basic elements that comprise the universe are not point-like particles, but strings resembling miniature violin strings. These tiny, identical and one dimensional strings oscillating in the form of filaments are regarded as being like loops in appearance. It is assumed that the origin of all the diversity in the universe lies in the way these strings vibrate at different vibrations, in the same way that violin strings produce different sounds with different vibrations.(4)

Although it is not possible to see the size of the threads in the String Theory, the only theory to bring theories such as Einstein’s theory of general relativity and quantum mechanics together in a coherent way, it can still be calculated mathematically. These strings, which scientists regard as the material from which space and time are woven, are just 1.6×10-35 m (0.000000000000000000000000000000000016 meters) in size.(5) This, known as Plank’s length, is the smallest known, being just 10-20 of the protons that make up the nucleus of that atom.(6) If an atom were to be magnified to the size of the Solar System, each one of these strings would be no bigger than a tree.(7) Bearing in mind that an atom is 100,000 times smaller than the smallest thing that can be seen with the naked eye, the minute scale of these strings can be more easily grasped. 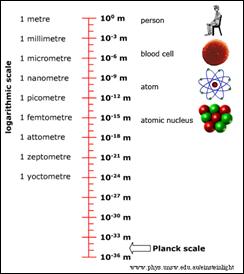 In this theory, Einstein wove the gravitational field into the very fabric of space and time… The continuum we are all used to is only an approximation. Perhaps the simplest way to visualize these ideas is to look at a piece of fabric. For all practical purposes, it represents a 2-dimensional continuum; yet it is really woven by 1-dimensional threads. The same is true of the fabric of space-time. It is only because the “quantum threads” which weave this fabric are tightly woven in the region of the universe we inhabit that we perceive a continuum. Upon intersection with a surface, each thread, or polymer excitation, endows it with a tiny “Plank quantum” of area of about 10-66 cm2. So an area of 100 cm2 has about 1068 such intersections; because the number is so huge, the intersections are very closely spaced and we have the illusion of a continuum.(8)

An Article in the New York Times seeking an answer to the question “How Was the Universe Built?” contained the following lines:

Even the tiny quarks that make up protons, neutrons and other particles are too big to feel the bumps that may exist on the Planck scale. More recently, though, physicists have suggested that quarks and everything else are made of far tinier objects: superstrings vibrating in 10 dimensions. At the Planck level, the weave of space-time would be as apparent as when the finest Egyptian cotton is viewed under a magnifying glass, exposing the warp and woof.(9)

In his book Three Roads to Quantum Gravity, the theoretical quantum physicist Lee Smolin devotes one chapter to “How to Weave a String” and says this on the subject:

In his book Our Cosmic Habitat the cosmologist and astrophysicist Prof. Martin Rees says:

According to our present concepts, empty space is anything but simple… and on an even tinier scale, it may be a seething tangle of strings.(11)

The way that Allah describes the universe as being woven paths and orbits in verse 7 of Surat adh-Dhariyat shows that the Qur’an is in extraordinary agreement with science. As can be seen in a great many other instances, the way that all the information revealed in the Qur’an 1400 years ago is confirmed by modern scientific data is highly thought provoking. This perfect harmony between the Qur’an and scientific developments clearly reveals that the Qur’an is the word of our Lord, the creator of and He who knows best about all things. In one verse Allah states:

“Will they not ponder the Qur’an? If it had been from other than Allah, they would have found many inconsistencies in it.” (An-Nisa 4:82)

The University of Pittsburgh physicist Carlo Rovelli presents a model woven like a web in order to represent the microscopic architectural structure of the universe.
——————————–

(2) George Johnson, “How Is the Universe Built? Grain by Grain”, The New York Times, 7 December 1999; http://www.nytimes.com/library/national/science/120799sci-planck-length.html

(9) George Johnson, “How Is the Universe Built? Grain by Grain”, The New York Times, 7 December 1999; http://www.nytimes.com/library/national/science/120799sci-planck-length.html