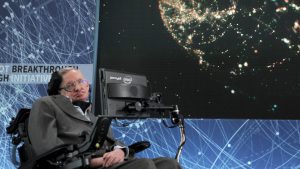 In September 2014 he joined the Starmus Festival as keynote speaker and declared himself an atheist.

Stephen William Hawking (8 January 1942 – 14 March 2018) was an English theoretical physicist, cosmologist, author and Director of Research at the Centre for Theoretical Cosmology within the University of Cambridge. His scientific works included a collaboration with Roger Penrose on gravitational singularity theorems in the framework of general relativity and the theoretical prediction that black holes emit radiation, often called Hawking radiation. Hawking was the first to set out a theory of cosmology explained by a union of the general theory of relativity and quantum mechanics. He was a vigorous supporter of the many-worlds interpretation of quantum mechanics.

Hawking was an Honorary Fellow of the Royal Society of Arts (FRSA), a lifetime member of the Pontifical Academy of Sciences, and a recipient of the Presidential Medal of Freedom, the highest civilian award in the United States. In 2002, Hawking was ranked number 25 in the BBC’s poll of the 100 Greatest Britons. He was the Lucasian Professor of Mathematics at the University of Cambridge between 1979 and 2009 and achieved commercial success with works of popular science in which he discusses his own theories and cosmology in general. His book, A Brief History of Time, appeared on the British Sunday Times best-seller list for a record-breaking 237 weeks.

Hawking had a rare early-onset slow-progressing form of motor neurone disease (also known as amyotrophic lateral sclerosis or “ALS” and Lou Gehrig’s disease), that gradually paralysed him over the decades. Even after the loss of his speech, he was still able to communicate through a speech-generating device, initially through use of a hand-held switch, and eventually by using a single cheek muscle.

Plans for a trip to space

In late 2006, Hawking revealed in an interview with BBC that one of his greatest unfulfilled desires was to travel to space; on hearing this, Richard Branson offered him a free flight into space with Virgin Galactic, which Hawking immediately accepted. Besides personal ambition, he was motivated by the desire to increase public interest in spaceflight and to show the potential of people with disabilities. On 26 April 2007, Hawking flew aboard a specially-modified Boeing 727-200 jet operated by Zero-G Corp. off the coast of Florida to experience weightlessness. Fears the maneuvers would cause him undue discomfort proved groundless, and the flight was extended to eight parabolic arcs. It was described as a successful test to see if he could withstand the g-forces involved in space flight. At the time, the date of Hawking’s trip to space was projected to be as early as 2009. However, commercial flights to space did not commence before his death.

Hawking died at his home in Cambridge, England, early in the morning of 14 March 2018. His family stated that he “died peacefully”. He was eulogised by figures in science, entertainment, politics, and other areas. The college flag at Cambridge’s Gonville and Caius College flew at half-mast and a book of condolences was signed by students and visitors.

In 2006 Hawking posed an open question on the Internet: “In a world that is in chaos politically, socially and environmentally, how can the human race sustain another 100 years?”, later clarifying: “I don’t know the answer. That is why I asked the question, to get people to think about it, and to be aware of the dangers we now face.”

Hawking expressed concern that life on Earth is at risk from a sudden nuclear war, a genetically engineered virus, global warming, or other dangers humans have not yet thought of. Such a planet-wide disaster need not result in human extinction if the human race were to be able to colonise additional planets before the disaster. Hawking viewed spaceflight and the colonisation of space as necessary for the future of humanity.

Hawking stated that, given the vastness of the universe, aliens likely exist, but that contact with them should be avoided. He warned that aliens might pillage Earth for resources. In 2010 he said, “If aliens visit us, the outcome would be much as when Columbus landed in America, which didn’t turn out well for the Native Americans.”

Hawking warned that superintelligent artificial intelligence could be pivotal in steering humanity’s fate, stating that “the potential benefits are huge… Success in creating AI would be the biggest event in human history. It might also be the last, unless we learn how to avoid the risks.”

Hawking argued that computer viruses should be considered a new form of life, and stated that “maybe it says something about human nature, that the only form of life we have created so far is purely destructive. Talk about creating life in our own image.”

At Google’s Zeitgeist Conference in 2011, Hawking said that “philosophy is dead”. He believed that philosophers “have not kept up with modern developments in science” and that scientists “have become the bearers of the torch of discovery in our quest for knowledge”. He said that philosophical problems can be answered by science, particularly new scientific theories which “lead us to a new and very different picture of the universe and our place in it”.

Hawking stated that he was “not religious in the normal sense” and he believed that “the universe is governed by the laws of science”. Hawking stated:

In 2008, Hawking stated, “The laws may have been decreed by God, but God does not intervene to break the laws”. In an interview published in The Guardian, Hawking regarded the concept of heaven as a myth, believing that there is “no heaven or afterlife” and that such a notion was a “fairy story for people afraid of the dark”. In 2011, when narrating the first episode of the American television series Curiosity on the Discovery Channel, Hawking declared:

We are each free to believe what we want and it is my view that the simplest explanation is there is no God. No one created the universe and no one directs our fate. This leads me to a profound realisation. There is probably no heaven, and no afterlife either. We have this one life to appreciate the grand design of the universe, and for that, I am extremely grateful.

In September 2014 he joined the Starmus Festival as keynote speaker and declared himself an atheist. In an interview with El Mundo, he commented:

Before we understand science, it is natural to believe that God created the universe. But now science offers a more convincing explanation. What I meant by ‘we would know the mind of God’ is, we would know everything that God would know, if there were a God, which there isn’t. I’m an atheist.