Let us look at the picture above. Anything special? It shows a young woman with a plane behind her. A nice picture. Wait, the woman seems to be armless. Probably a silly Photoshop job. Well, Photoshop is indeed an enormously creative tool to transform many special images, but that would be hardly anything meaningfully special.

This picture is special not because of Photoshop, or not even because the young woman (33) is armless. Of course, a life being armless is indeed special and may God bless her for the wonderful smile on her face. But the real reason this woman and the picture are super-special is because this armless woman is a fully licensed pilot. Meet Jessica Cox from Arizona, USA. She is the first licensed armless pilot. Now it sounds special enough. Right? But it gets better.

She is armless not because of any accident, but she was born with a rare birth defect. Well, what can courage and resolution do? How can they help a person to accomplish his or her dream? The name Jessica Cox is the answer, for example. Being born as armless not only has not taken away her captivating smile, but also has not deterred in the least from anything she wanted in life. Did I say that she is even more special than being an armless pilot? Well, watch out. She is also the first armless black-belt holder in the American Taekwondo Association. “Using her feet as most people use their hands, she is able, among other things, to drive a car, … to type on a keyboard (25 words per minute), to pump her own gas, and to put in and remove her Contact lenses.” [Link] To learn more about this extraordinary woman, read her autobiographical work, quite meaningfully titled ” Disarm Your Limit: The Flight Formula to Lift You to Success and Propel You to the Next Horizon (2015).”

Now let us look at this above picture. The readers might ask, well, what is special about this? In addition, this is picture of a woman in hijab. What is that girl doing with a car behind her? Hopefully, she is not a driver and in the Kingdom of Saudi Arabia, where contradicting Islam, women are barred from driving. Only recently, due to the courtesy of a young new all-powerful, unquestioned prince, that right is being gradually granted, a right that was never in conflict with Islam. Well, she is not from Saudi Arabia, and the story is not special because she can or does drive.

The issue of hijab is relevant here because there is a growing tension in the West due to Muslim women covering themselves in various degree: Burkini, Burka, Scarf (head covering), etc. The mayor of Cannes labeled it a “symbol of Islamic extremism.” Prime Minister Manuel Valls claims the burkini symbolizes Islam’s “enslavement of women.” [Chicago Tribune] Well, anyone can think anything he or she wants. Nevertheless, just like how to cover or not to cover is one’s choice and it does not symbolize violence (including violence to any culture), it also is not a limit for those who want to transcend “limits.” 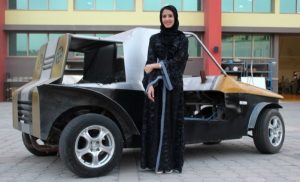 Meet Reem Al-Marzouqi (25). She is an Emirati young woman, also an engineer. What makes her special? We know UAE has the tallest this, biggest that, etc. Nevertheless, Reem is the first citizen of the UAE to be granted a patent in the United States of America for designing a car that can be driven without hands. A young hijabi Engineer is granted such a patent. That in itself is special. However, her design is for cars to be driven without hands. Without hands? Meaning, armless? Yes. That is what makes this a related story and an inspiration for all. If Cox symbolizes courage and resolution, Reem symbolizes care and ingenuity.

How are these two stories related?

Inventors/innovators need not just inspiration, but also ideas or problems that they can solve. Reem’s inspiration and source of idea was Jessica Cox. Reem once watched a TV interview on Inside Edition with Jessica Cox. She came to learn that even though Jessica is the world’s first licensed armless pilot, she also had difficulties with driving cars, especially for long distances, using only her feet. Indeed, when attempting to drive car once, the privilege was suspended due to violation in safety rules.

Reem was deeply inspired by Jessica’s courage and resolution and her accomplishments, but she was also deeply moved due to Jessica’s limitation in driving cars. Just like it happens with inventors and innovators, something makes bulb light up inside their head. Her care, combined with talent/ingenuity, moved her to undertake a project so that armless individuals like Jessica could drive as well.

Reem dedicated herself to solve the problem and ultimately came up at the age of 25 her original invention, a “Lower Extremity Vehicle Navigation Control System” for which she was also granted a U.S. patent. “The system uses a steering lever, an acceleration lever and a brake lever which are entirely foot-controlled, allowing people to drive a car without the use of their upper body. The system is the first of its kind …”

I find the two stories deeply inspiring. Jessica Cox shows the humanity that we gracefully accept what we are as a blessing from God and try the best to reach our potential – indeed, sky is the limit in a proverbial sense here, and Reem al-Marzouqi, a young Muslim woman, steps forward to facilitate more freedom to those who are constrained like Jessica Cox. We need to think at the level of humanity and rise above our pettiness and parochialism.

Courage and resolution, combined with ingenuity and a little care, can help us push many frontiers, make positive differences to life of others, and make this world a little better place. This also constitutes an essential dimension of the Qur’anic dictum amal as-salihat, generally translated and understood as good, virtuous or righteous deeds, but in essence these deeds are not to be merely self-serving, but positively and affectionately touching other lives.

“… [T]hose who attain faith and do righteous deeds (‘amilu as-salihat) We shall bring into gardens (Jannah) through which running waters flow, therein to abide beyond the count of time: this is, in truth, God’s promise – and whose word could be truer than God’s?” [An-Nisa’ 122]

The author is an economist and Islamic Finance expert in the Gulf Region. He can be reached at: [email protected]. You can also visit his website at: http://www.mofarooq.net