The Amazing Creation of Sea Turtles 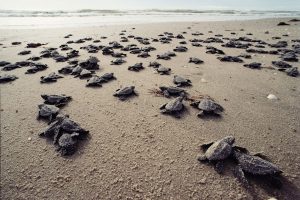 Finally, thousands of travelers with no compass, meet on the same beach at the same time.

The Amazing Creation of Sea Turtles

Sea turtles living in the oceans surge in crowds towards the beach when it is time for them to reproduce. This is no ordinary beach though. The beach they arrive at to reproduce has to be the one where they were born.

Sometimes sea turtles have to travel as far as 800 kilometers to return there. But a long and tough journey does not change the situation. They arrive at the beach where they were born to give birth to their offspring, no matter what.

It is quite unaccountable in terms of evolution or chance how a living being can find its way back to the very same beach 20-25 years after its departure from there. It is all the more extraordinary that it can find the direction of its birthplace in the depths of the ocean where so little light penetrates, and then spot it from among numerous similar beaches.

Thousands of offspring under the sand have to overcome a number of formidable obstacles after breaking their eggs with the hard lump on their head. The hatchlings of an average of 31 grams cannot dig the earth layer above them on their own and they all help each other. When thousands of hatchlings on the beach start to dig the earth, they make it to the sand surface in a few days. Yet before they appear on the surface, they wait for a while for nightfall. For in the day time, there is the danger of falling prey to predators.

In addition, it would be quite difficult for them to proceed by crawling on sands scorched by the sunlight. When night falls, they go up to the surface after completing the digging process. Although it is dark, they rush to the sea and depart from the beach to return there as much as 20-25 years later.

It is impossible for these hatchlings to know that they have to dig their way up after they pop out of their eggs and wait for a while at a certain distance from the sea. It is by no means possible for them to know, when they are still buried in the earth, whether it is day or night, that predators exist outside and that they could fall a prey to them, that the sand is scorching because of the Sun, that this could harm them, and that they must rush to the sea. So, how does this conscious conduct come about?

The only answer to this question is that these hatchlings have been “created” to behave in this way, which means that Allah, Who created them, has inspired in them the instinct that helps them protect their lives.

“He [Allah] hath created the heavens without supports that ye can see, and hath cast into the earth firm hills, so that it quake not with you; and He hath dispersed therein all kinds of beasts. And We send down water from the sky and We cause (plants) of every goodly kind to grow therein. This is the Creation of Allah. Now show me that which those (ye worship) beside Him have created. Nay, but the wrong doers are in error manifest!” (Luqman 31: 10-11)

2 thoughts on “The Amazing Creation of Sea Turtles”

The turtles are a perfect example of evolution. The island was nearby and safe from predators millions of years ago. Then, plate tectonics has moved it further away a few centimeters a year. Those that cannot find their way back to the island are eliminated from the gene pool. Those that can navigate give birth to offspring with the same abilities.

Thank you for your comment; however, your claims need to be evidenced and proved scientifically correct via empirical as well as scientific research; a matter which has never been done before. Anyhow, thanks again and we hope that you become a regular visitor to our website.