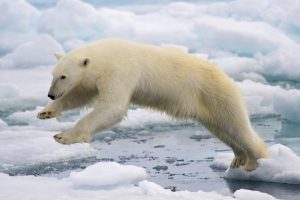 Apart from this, in water, it can close its nostrils and keep its eyes open, and its webbed feet, similar to those of ducks, make it a good swimmer.

If you saw a polar bear, which is one of the biggest animals on earth, you might assume it to be a giant snowman. This giant snowman weighs around 800 kilograms (1763 pounds) and is about two and a half meters (98 inches) long. Put the weight of ten men together and they will weigh a polar bear!

The polar bear has some amazing features which allow it to live at the North Pole. Despite the polar climate, glaciers, and snowstorms, as a miracle from Allah, a thick layer of fat underlying its skin protects the polar bear from cold. Its fur is thick, dense, long and fluffy. Have you ever thought about why polar bears with such characteristics do not live in the deserts of Africa? Certainly, the answer is that Allah has created him with features suited to the environment in which he lives. Think for a moment! If he were in the desert, he could hardly withstand the hot climate of the desert for a minute.

What makes the polar bear different from all other bears is that it is not very fond of hibernation. Only the female polar bears, especially those pregnant, hibernate for a long period. Allah, “Ar-Razzaq, the One Who continuously provides sustenance to all living beings,” has made food available for the new-born cub. The milk of polar bears contains a high amount of fat. This fatty milk is what the Cubs need most. They grow very fast, thanks to this fatty milk, and get ready to go out of their caves in the spring.

Have you heard that the polar bear is a very good swimmer and diver? That is true! The polar bear is a skilled swimmer and diver. While swimming, it uses its forelegs. That it can use its legs as paddles is something by which Allah has made life easy for him. Apart from this, in water, it can close its nostrils and keep its eyes open, and its webbed feet, similar to those of ducks, make it a good swimmer.

The polar bear lives in the coldest regions of the world such as the North Pole, Northern Canada, and Northern Siberia. But the feet of the polar bear never become cold. You could hardly keep your feet or hands-on ice for more than a couple of minutes. Surprisingly, however, the polar bear does not even feel this cold since its feet are covered with thick fur. Allah gave it just the right features so that it would not be affected by the cold. If it were covered with skin similar to that of human beings, it would never survive. Moreover, the fatty layer ten centimeters (four inches) thick under its skin provides heat insulation. Therefore, in icy waters, it can swim 2000 kilometers (1242 miles) at a speed of 10 to 11 kilometers (6 to 7 miles) per hour.

Do you know why the color of polar bears is white or off-white? It is hard to notice the white polar bear among the white snow-covered glaciers and the frozen wastes of the north that extend for thousands of kilometers. Imagine how difficult it would be for it to hide if its color were as black as a crow or as colorful as one of the parrots living in the tropical forests.

Polar bears’ sense of smell is so keen that they can readily smell a seal that hides under a layer of snow one and a half meter (59 inches) thick. While hunting, polar bears also employ some tactics. Now, visualize a polar bear with its snow-white fur looking like a snowman. Do you think anyone would notice it if it lays on the snow? If you only considered its white fur, you might have said “yes”. But, remember that the polar bear also has a black nose. On white snow, this nose makes perfect camouflage impossible. But the polar bear does something very intelligent and eliminates this problem. It covers its nose with its white forepaws. Totally hidden in the snow, it awaits its prey’s approach.

This point deserves particular attention because for a polar bear to employ hunting tactics it must be intelligent. Think for a moment: the polar bear is aware that its white color is a perfect match for the environment in which it lives. Moreover, it is wise enough to realize that it needs to cover its black nose, the only obstacle to its camouflage. As you can also imagine, it is unlikely that the polar bear would have found this tactic after a few unsuccessful hunting experiences! Bears are inspired by Allah and are taught to act in this way. Because, like all other creatures, they are also under the protection of Allah.