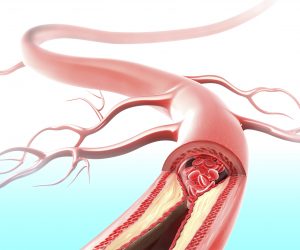 Everybody knows that bleeding will eventually stop when there is a cut or when an old wound starts bleeding again. Where the bleeding is, a blood clot forms that hardens and heals the wound in due time. This may be a simple and normal phenomenon for you, but biochemists have shown through their research that this actually is the result of a very complicated system at work. The lack of any one component of this system or any damage to it would render the whole process useless.

Blood has to coagulate in the right time and place and when normal conditions are restored, the clot should vanish. The system functions flawlessly down to the minutest detail.

The smallest elements of the bone marrow, the blood platelets or thrombocytes, are crucial. These cells are the main elements of the coagulation of blood. A protein, called the Von Willebrand factor, ensures that, in their continuous patrol of the bloodstream, these platelets do not miss the place of the injury. The platelets that become entangled in the location of the injury release a substance that collects countless others to the same place. These cells eventually shore up the open wound. The platelets die after performing their duty in locating the wound. Their sacrifice is only a part of the coagulation system in the blood.

Thrombin is another protein that facilitates coagulation of blood. This substance is produced only at the location of the wound. This production must be neither more nor less than necessary and has also to start and stop exactly at the required times. There are more than twenty body chemicals called enzymes that have roles in the production of thrombin. These enzymes can trigger its reproduction or halt it. The process is under so much scrutiny that thrombin only forms when there is a real wound to the tissues. As soon as the enzymes of coagulation reach a satisfactory level in the body, fibrinogens that are composed of proteins are formed. In a very short while, a mesh of fibers forms a web, which is formed at the location of the escaping blood. In the meantime, patrolling platelets continue to become entangled and accumulate at the same location. What is called a clot is the plug that is formed due to this accumulation.

When the wound totally heals, the clot dissolves.

The system works flawlessly down to the minutest detail.

What would happen if there were small problems with this perfectly functioning system? For example, if there was coagulation in the blood even without a wound, or if the clot could easily break off from the wound? There is a single answer to these questions: in such cases, the bloodstream to the most vital and intricate organs, such as heart, brain, and lungs, would be clogged with clots, which would inevitably bring death.

In reality, this shows us one more time that the human body is flawlessly designed. It is impossible to explain the clotting system of the blood through the hypothesis of coincidence or “gradual development” as asserted by the theory of evolution. Such a carefully engineered and calculated system as this is indisputable evidence of the perfection in creation. Allah, Who created us and placed us on this earth, has created our bodies with this system, which protects us in many cases of injury that we encounter throughout our lives.

The clotting of blood is very important not only for visible injuries but also for the ruptures of capillaries in our bodies that happen all the time. Although unnoticed, there are continuously small internal bleedings. When hitting an arm against a door or sitting down too heavily, hundreds of capillaries are ruptured. These bleedings are immediately stopped by means of the clotting system and the capillaries are reconstructed in their normal condition. If the impact is more serious, then the internal bleeding is stronger, giving way to the bruising commonly termed “turning purple”. A human lacking the coagulation system would have to avoid even the smallest impacts. Hemophilic patients, having defective coagulation systems, live their lives like that. Patients with advanced hemophilia unfortunately do not survive too long. Even small internal bleedings, inflicted by a simple slip and fall, could be enough to end their lives. Due to this simple reality, each individual should consider the miracle of creation within his/her own body and be thankful to Allah, Who created that body flawlessly. This body is a blessing to us from Allah, a single cell of which we cannot even reproduce. When addressing mankind, Allah says: