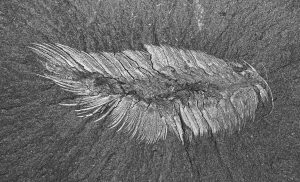 The fossils enclosed between the very thin layers of rock were like miniature X-rays, revealing details of even their soft tissues.

Charles Doolittle Walcott was a paleontologist and the secretary (1907-1927) of the Smithsonian Institution, America’s national museum. He learned that railway workers in the Burgess region near the Canadian Rocky Mountains had discovered a number of fossils, and made visits to the area to see for himself and look for specimens of the fossils in question, beginning in July 1907.

On 31 August, 1909, this experienced paleontologist paid yet another research visit to Burgess. But this day was very different: At the beginning, the investigation he carried on that day appeared to be a very ordinary one. But it turned out to be one of the greatest discoveries in the history of paleontology.

The bedrock in Burgess Shale consists of schist—a rock consisting of thin strata, or layers. When struck at the appropriate angles, the rock can be easily split into thin plates, thus revealing the fossils inside them. Thus on that day, Walcott came by the first Cambrian fossil in Burgess Shale. He marked the location of the fossil in order to begin a detailed investigation later on. Upon resuming his research, he obtained findings that were invaluable in paleontological terms.

In the course of the investigations he carried out in those years, Walcott discovered the remains of certain soft-bodied organisms that at first sight appeared very mysterious. He tried to identify them and to understand why he had found them there, since according to the state of knowledge at the time, no such fossils should have been present. Realizing that his findings were extraordinarily important, Walcott immediately set to studying the exceedingly well preserved specimens he had uncovered.

The oldest Cambrian strata contained animal fossils that displayed a magnificent variety and complexity, opening a window onto a period hundreds of millions of years in the past. Although these fossils belonged to soft-bodied organisms, they were exceptionally well preserved. The fossils enclosed between the very thin layers of rock were like miniature X-rays, revealing details of even their soft tissues. He found fossils belonging to various known groups, of marine creatures, most of them soft-bodied, including brachiopods, worms and arthropods.

But what were fossils of creatures that had lived on the sea bed hundreds of millions of years ago doing some 3,000 meters (9,850 feet) high in the Rocky Mountains? It appeared that these creatures had been covered over in sand as the result of an underwater slide that had occurred hundreds of millions of years ago, and that this sediment-containing strata had risen up under the influence of geological pressures to form the Rocky Mountains. This made it possible for exceedingly well-preserved fossils of the ancient, yet complex living things to be to Walcott’s gaze.

Inspired by the nearby Mount Burgess, Walcott named the region “Burgess Shale” and collected some 65,000 fossil specimens there between 1910 and 1917.

When he saw to which phyla these fossils belonged, Walcott was amazed. The fossil stratum he had discovered was very old, and no life forms worthy of note had been found in any older strata; yet this stratum contained organisms from almost all known phyla. Moreover, Walcott had discovered fossils belonging to unknown phyla as well. This showed that all the various body structures in the animal kingdom had appeared together during the same geological period.

This represented a lethal blow to Darwin’s theory, since Darwin had maintained that organisms must have developed as do the spreading branches of a tree. According to the tree of life Darwin had imagined, there must initially have been a single phylum on Earth, after which different phyla began to emerge or “branch off” from it over long periods of time. Yet Walcott was looking at evidence that demonstrated that over two dozen phyla had emerged together and suddenly. This meant a total refutation of the “evolutionary tree” idea. Phyla, represented by the most remote branches of the tree and which should have appeared last, after species had time to differentiate, actually emerged at the beginning of the history of life.

No doubt Walcott’s discovery was highly significant, yet it took another 70 years for the blow it had dealt to Darwinism to be revealed.

Instead of making the fossils he had obtained available to the world of science, Walcott decided to hide them. He was then the secretary of the famous Smithsonian Institution in Washington D.C., and also a dyed-in-the-wool Darwinist. According to the theory of evolution, relatively simple fossils should be expected in rocks of that age. Yet in terms of anatomical complexity, there was no difference between the fossils Walcott discovered and present-day creatures such as crabs, starfish and worms. For Darwinists, the alarming aspect about this was that in older rocks, no fossils had been encountered that could possibly be the forerunners of the creatures in this Burgess Shale formation.

Faced by this dilemma, Walcott felt sure that the fossils he had discovered would represent a major difficulty for the theory of evolution. So instead of announcing them, he sent them to the Smithsonian Institution, along with a few photographs he had taken and a series of notes.

The Burgess Shale fossils were locked away in drawers and forgotten for the next 70 years. They saw the light of day only in 1985, when the museum’s archives were being re-examined. The Israeli scientist Gerald Schroeder comments:

Had Walcott wanted, he could have hired a phalanx of graduate students to work on the fossils. But he chose not to rock the boat of evolution. Today fossil representatives of the Cambrian era have been found in China, Africa, the British Isles, Sweden, Greenland. The explosion [in the Cambrian Period] was worldwide. But before it became proper to discuss the extraordinary nature of the explosion, the data were simply not reported.

Decades after Walcott’s death, the Burgess Shale fossils were re-examined. Harry Blackmore Whittington, Derek Briggs and Simon Conway-Morris, a team of scientists known as the Cambridge Group, performed a detailed analysis of the fossils in the 1980s. They concluded that the fauna were even more varied and extraordinary than Walcott had stated, and reported that the fossils could not be classified under any known categories. All these organisms had emerged suddenly in the Cambrian Period, between 542 and 490 million years ago, in their exceedingly developed and complex forms.

The results that emerged were so unexpected that scientists referred to their sudden appearance as an “explosion.” The Cambrian explosion was one of the most remarkable phenomena in the history of science, and for evolutionist scientists, one of the most inexplicable. Even Darwin, aware of the Cambrian findings from his own time, admitted that there would be doubts as to the validity of his theory until this significant phenomenon could be accounted for. Thus it was that the scientific world’s knowledge of the Burgess Shale fossils was delayed. These very well preserved fossils were like opening a window onto pre-Cambrian ecosystems of hundreds of millions of years ago. Scientists therefore became ever more interested in what they might reveal. The unearthing of new Cambrian fossil zones in the 1980s further increased scientific interest in the Cambrian explosion. These new paleontological discoveries showed that the scope of the Cambrian explosion was even greater than had been imagined—which made matters even more difficult for evolutionists.

So far, this book has examined the pre-Cambrian Period and its life forms. In the next part, we shall be examining the Cambrian, in which an even more dazzling variety of life appeared. For that purpose, we shall consider the course of biological diversity in the pre-Cambrian and later periods, to provide a general idea about the emergence of living categories. We shall then examine the Cambrian’s extraordinary complexity and see how these creatures’ superior systems and structures pose a major dilemma for evolutionists.

After the chapter on complexity, we will compare the facts revealed by the fossil record with the assumptions of Darwinism and see why Darwinism is now a bankrupt theory.

But at this point, we can summarize the emergence of phyla—the main categories of organisms: