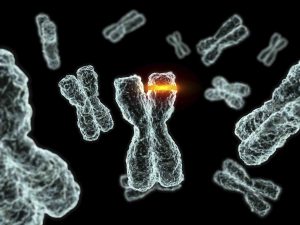 Mutations as a result of radiation or chemical reactions

This new evolutionist model, known as Neo-Darwinism, proposed that evolution came about through the two-fold operation of natural selection and mutation. However, claiming that mutation can cause species to develop into new ones is no more scientific than the claims for natural selection.

Mutations arise from replacements and interruptions that occur due to chemical effects and radiation on the DNA molecule, located in the nucleus of living cells and which contains all the genetic information relevant to an organism. DNA information is formed by the ordered sequence of four nucleotides known by the letters A, T, C and G. The least error in the sequence of these nucleotides will ruin a given structure completely.

For example, if a single letter were displaced in a 46-volume encyclopedia (whose contents would correspond to the information contained in DNA), no reader would care and probably not even notice. But the displacement of only one “letter” at any point in a DNA molecule—for example, at the 2,435,268th link of the DNA chain—could cause serious consequences for a human being.

As just one example, childhood leukemia is caused by the wrong arrangement in one of the letters in the DNA. As a result of the atomic bomb dropped on Hiroshima and the radiation leak in Chernobyl, children were born handicapped or developed leukemia because of the dangerous effects of mutations in their bodies.

Mutations as a result of radiation or chemical reactions cause one of these billions of letters to change places in the DNA chain with another or to disappear completely. So, living creatures can suffer damage as a result of the least alteration in this arrangement. Throughout the years, many laboratory experiments have shown beyond doubt the damage that mutations can wreak on living creatures.

First, genuine mutations are very rare in nature. Secondly, most mutations are harmful since they are random, rather than orderly changes in the structure of genes; any random change in a highly ordered system will be for the worse, not for the better. For example, if an earthquake were to shake a highly ordered structure such as a building, there would be a random change in the framework of the building which, in all probability, would not be an improvement.

The noted evolutionist, Pierre Paul Grassé, admits that mutation cannot cause any development in a living creature or change it into another species. He says that to believe such a thing is pure fantasy:

The opportune appearance of mutations permitting animals and plants to meet their needs seems hard to believe. Yet the Darwinian theory is even more demanding: A single plant, a single animal would require thousands and thousands of lucky, appropriate events. Thus, miracles would become the rule: events with an infinitesimal probability could not fail to occur… There is no law against daydreaming, but science must not indulge in it.

James F. Crow is professor emeritus of genetics and zoology at the University of Wisconsin and an expert in the field of radiation and mutation. He prepared a report that compared mutations that randomly target DNA to the random alteration of connections in a television set, showing plainly that random changes don’t improve the quality of the picture on a television screen.

From this, clearly, the evolutionists’ claim that mutations cause species to develop and turn into other species is like believing that, if a person took a hammer and started chopping randomly at a computer, the computer would develop into a more advanced version. Indeed, making such a claim is highly unreasonable. Evolutionists speak of stranger and more illogical things than the man who assaults his computer with a hammer in the hopes of developing a new one.

But in spite of this, many people believe them. Sometimes ignorance lies at the bottom of this naiveté, but more often, the effect of the spell of Darwinism is to blame. As we shall see in the following chapters, because of the evolutionists’ various inculcation methods, people believe most of their claims at face value, ignoring how impossible and unscientific they are.