Darwinism and Other Manmade Religions 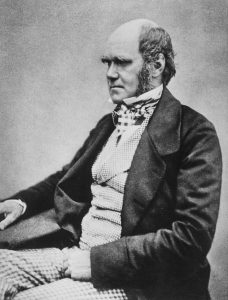 It is erroneous to think that this concept has now disappeared into the mists of history and perished along with ancient civilizations.

Darwinism did not begin with the theory established by the amateur observations and investigations of Charles Darwin and other scientists in the 19th century. Its origins go back to much earlier materialist philosophies. Darwinist beliefs were first encountered a few thousand years ago in the polytheistic and materialistic religions of Greece and Sumeria. Therefore, Charles Darwin was not the first person to put forward the idea of evolution; he was an amateur researcher who traced the main outlines of this basic belief, gave form to its doctrines, and later established a theory.

The inscriptions of pagan Sumeria, which deny Allah and assert that living things came to be through an evolutionary process, form the backbone of the religion of Darwinism. When Sumerian inscriptions were examined, they revealed a legend stating that first there was a watery chaos and out of that two gods emerged: Lahmu and Lahamu. According to this belief, the two gods first created themselves, and later as they evolved, brought other material and living things into existence. In other words, life appeared all at once from the lifeless, watery chaos. The evolutionists’ belief that living things first formed from lifeless matter has much in common with the Sumerian belief that the universe developed through an evolutionary process.

When ancient Egyptian religion is examined, the same beliefs are found; “snakes, frogs, worms and mice were said to be created from the mud deposited by the flooding of the Nile.” In other words, denying the existence of a Creator, the Egyptians also believed that living things came out of mud at random. The creation myths of both the Egyptians and Babylonians include the concept of a “primordial sea from which the earth and life arose.”

It is erroneous to think that this concept has now disappeared into the mists of history and perished along with ancient civilizations. Today evolutionists maintain the same idea; they would have the scientific world believe that first there was the sea, the watery chaos, or as they call it, “primeval soup.” According to the theory of evolution, four billion years ago some inanimate chemical elements in the primal earth’s atmosphere necessary for the development of life, such as carbon and phosphorus, by an operation of chance factors came together in water under the right conditions and in the right proportions. In the meantime, there were lightning storms and quakes, and the first building block of life, amino acids, came into being. By the same operation these amino acids became proteins, the proteins formed cells, and through the continuation of this chain of random occurrences, human beings finally came to be…

However, the claim that lifeless matter can coalesce to form life has not been verified in any observation or experiment; it is an extra-scientific claim. Every living cell comes into existence from the division of another living cell. No one in the whole world, even in the most advanced laboratory, has succeeded in making a living cell from non-living material, which shows that the first cell was most certainly created with conscious intent.

Hinduism, which has found masses of adherents for itself in southern Asia with its complex rituals and pagan doctrines, is also founded on the belief that all living things emerged from the oceans. This belief is expounded in detail in the Rig Veda and the Atharva Veda scriptures which illustrate Hindu doctrines with stories of legendary characters. Hinduism rejects the idea of a Creator; according to its philosophy, the whole of the universe evolved out of a huge, glob-like mass of material substance, “prakriti.” Everything, animate and inanimate, evolved from this primordial substance. At the end of each cosmic period, all things are dissolved into their original elements, into prakriti, after which the whole evolutionary process begins again. That is, the universe is reformed from this primal lifeless matter.

One of the greatest impasses in the religion of Darwinism is the question of how living things first came into being. Evolutionists generally prefer to avoid this question because the most concrete answer they can give is no different from that given by religions of centuries ago. During the period in which Darwinism developed, false beliefs about the formation of living things were already prevalent; flies came from sweat, frogs from mud, and ants from sugar.

One of these nonsensical beliefs is that of the “hopeful monster” – the strangest theory in the history of evolution. Due to the fact that the hoped-for transitional fossil forms had not been found, some evolutionists were under a good deal of pressure. So they decided that there was no need for transitional forms because the transition from one species to another had happened suddenly. Consequently, they proposed the theory of the hopeful monster. According to this theory, the formation of living things is no different from the claim that ants came from sugar. The first bird emerged suddenly from a reptile egg; later, in the same way, another bird came by chance from another egg. These two birds came together, and a bird family formed. A similar theory, proposed by Charles Darwin, is that bears who spent much time in water changed into whales in the course of time. However, today’s scientific facts clearly demonstrate how unscientific and deceptive is this claim.