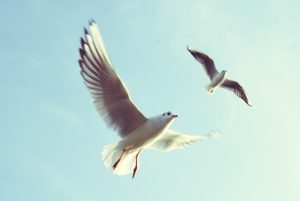 Without doubt, all power belongs to God and victory will always belong to those who devote themselves to God

There is no one who would not adore a bird that glides away through the sky with its wings open. Today, almost everyone agrees that birds can fly due to their certain extraordinary biological traits. However, how birds attained these traits that allow them to fly has become a source of speculation for some people.

Based on birds’ feather structure, the lightness of their bones and unidirectional respiratory system, some people who can reason with their mind and conscience think that it is impossible to be able to fly without all these traits and this can only be a work of a superior mind: Yet some look at the same creature and claim it evolved by itself in the nature and “even though they know the truth in their conscience”, they are in denial of the superior mind, namely God, Who brought this bird into being. Furthermore, they believe in extremely unreasonable explanations such as birds evolved in time from dinosaur-like reptiles and started to fly while chasing flies or jumping from tree to tree.

This unfounded story is presented as a scientific view all around the world, and through the imposition of the Darwinist dictatorship, hundreds of millions of people are led to believe in it.

In fact, this situation is not new, but has been going on ever since the period of the Egyptian, Babylonian and Sumerian civilizations. In historical research, expressions have been found in Sumerian inscriptions that deny creation and claim that living beings came into existence as a result of a gradual and random process. Egyptians, by the nature of their false religion, believed that “snakes, frogs, worms and mice were formed from the mud of the Nile that was inundated with floods.”

As it can be understood from this, communities and ideas that attack those who believe in God have always existed ever since the era of Nimrod or Pharaoh. However, these people have never been more organized than they are today and they hold a tremendous power called the media. They try to impose upon students at schools the idea that living beings were not created by God, but supposedly came into existence through coincidences. As a result of the Darwinist dictatorship’s compulsion, hundreds of thousands of teachers and professors and thousands of schools and universities teach the theory of evolution as if it is the only scientific fact. Through books and documentaries, the youth are led to believe in superstitions such as dinosaurs turned into birds by chasing flies and bears that hunted fish in rivers turned into whales.

No one is able to stand against this assertive system and governments fail to stop this education system. Even countries that are known as Islamic nation-states have given into the evolutionary belief.

Today, the faith of the people is under attack because of this Darwinist propaganda carried out in schools, press and media. Even though many Muslims suffer from this system that denies God, they cannot speak up and stand out against this issue. This superstitious Darwinist dictatorship, by reason of being a dajjal system, is a massive threat to the world. The wars, massacres, colonial mindset, moral corruption and all of the man-made disasters are caused by Darwinism, the deviant thought system that explicitly denies God. (Surely, we hold God above such thoughts.) Therefore, what Muslims must do is to wage a scientific struggle against this false system and spread the evidences that disprove the theory of evolution wherever possible.

For the first time in history, the denial of God is rampant and widespread. Of course, Almighty God will render this vile audacity futile and establish the reign of the Islamic moral values. In the Qur’an, God states this promise as follows:

“God has promised those of you who have faith and do right actions that He will make them successors in the land as He made those before them successors, and will firmly establish for them their religion with which He is pleased and give them, in place of their fear, security.” (an-Nur, 55)

Without doubt, no dajjal power will remain standing except the ones God wishes.

In the 55th verse of Surat an-Nur, God reveals in detail of a period when Islamic moral values will reign over the world and people will live their lives according to the beauties of Islamic moral values. This promise will come true in the era of the system of the Mahdi, in other words, in this century. When this promise is fulfilled, Hazrat Mahdi (as) will become the spiritual leader, guide of the Muslims.

Our Prophet (Peace and blessings be upon him) also stated that this victory of the believers will become a reality through Hazrat Mahdi (as) and talked in detail about the peace, love, prosperity and illumination of the period when Islamic moral values reign over the world.

The faith of Muslims will be established upon solid foundations and find its place into Muslims’ hearts only after the denial has become as strong as it can get and Muslims have started to wish for a Savior that would bring salvation to them. Muslims have always waited for a spiritual leader, a Savior, in every time of hardship. The commandment of the Qur’an necessitates this.

“What reason could you have for not fighting in the Way of God – for those men, women and children who are oppressed and say, ‘Our Lord, take us out of this city whose inhabitants are wrongdoers! Give us a protector from You! Give us a helper from You!’”  (an-Nisa, 75)

As God states in the verse, Muslims should pray to God for the coming of Hazrat Mahdi (as), who will deliver them from the seemingly powerful deniers to salvation and safety, as soon as possible. While doing that, they also should wage the most effective scientific struggle against the dajjal system of Darwinism that besets the entire world and should carry out a scholarly and effective work against the theory of evolution, the root of all disasters. Without doubt, all power belongs to God and victory will always belong to those who devote themselves to God.

“As for those who make God their friend, and His Messenger and those who have faith: it is the party of God who are victorious!” (al-Ma’idah, 56)

2 thoughts on “The Darwinist Hoax Defeated”