Deer: Famous for Their Antlers 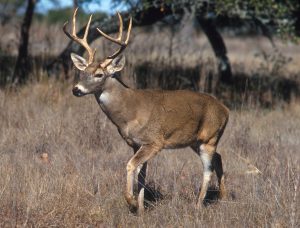 Allah has created these animals with antlers on their heads, thereby making it possible for them to protect themselves and their herds.

Have you ever touched an animal with antlers? If you did, you would surely be very astonished, because the antlers emerging from the animal’s hairy, soft skin are stony. You can compare an antler to your nails. The hard nails coming out of your soft skin and the way they grow so neatly probably astonish you. The way animals’ antlers grow is similar to the way our nails grow, yet they are much thicker, harder and bigger.

Except for the reindeer, in general, only male deer have antlers. Once the mating season is over, these antlers drop off and are renewed by others growing from beneath them.

While antlers grow, they are covered by a thin, velvet-like layer of skin. Once the antler is fully-grown, the veins are cut and thus can no longer feed the skin. At this stage, the deer abrades the skin by rubbing its antlers against hard surfaces causing the bony structure to appear. At six years of age, their antlers become fully-developed. After this age, they begin gradually to deteriorate. The length, shape, and number of branches differ from one deer to another.

You have probably asked yourself, “Why do deer have antlers?” Antlers are an important weapon for deer. With antlers, they can protect themselves from enemies. Sometimes, a predator only has to see the antlers to leave the deer alone.

A male red deer draws a border around its territory by smearing a substance secreted from his scent gland. In this territory, he sets up a herd consisting of female deer (doe). He protects his herd with his antlers from his enemies. Upon the entry of an alien into his territory, he pushes him out of it either by his roars or by attempting to gore him with the antlers.

Allah has created these animals with antlers on their heads, thereby making it possible for them to protect themselves and their herds. If Allah had not given them antlers, these animals would have remained defenseless and helpless against their enemies. A male deer could not protect female deer and thus his herd couldn’t be constituted. They would not have a weapon against wild animals.

Possibly, few people would ever think, “I wish some animals had a hard, bony substance having a branch-like structure on their heads so that they could protect themselves”. Even if it were the case, these people would fail to make this wish come true. Only Allah, Who has created all creatures most beautifully, has provided deer and other animals with defense mechanisms that exactly match their needs.

In the Qur’an, Allah reminds us this fact:

“Say: ‘In whose hand is the dominion over everything, He who gives protection and from whom no protection can be given, if you have any knowledge?’” (Al-Mu’minun: 88)

As stated in the following verse, the protector of all creatures is Allah alone.