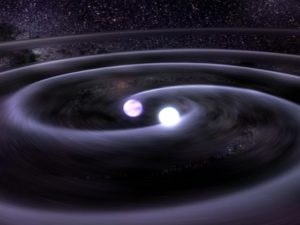 Explosions, however, do not bring about order.

In truth, the Big Bang caused much greater trouble for the materialists than the above confessions of Antony Flew. For the Big Bang not only proves that the universe was created out of nothing, but also that it was brought into being in a very planned, systematic and controlled manner.

The Big Bang took place with the explosion of the point which contained all the matter and energy of the universe and its dispersion into space in all directions with terrifying speed. Out of this matter and energy, there came about a great balance containing galaxies, stars, the Sun, the earth and all other heavenly bodies. Moreover, laws were formed called the ‘laws of physics’, which are uniform throughout the whole universe and do not change. All these indicate that a perfect order arose after the Big Bang.

Explosions, however, do not bring about order. All of the observable explosions tend to harm, disintegrate, and destroy what is present. For example, the atom and hydrogen bomb explosions, fire-damp explosions, volcanic explosions, natural gas explosions, solar explosions: they all have destructive effects.

If we were to be introduced to a very detailed order after an explosion – for instance, if an explosion under the ground gave rise to perfect works of art, huge palaces, or imposing houses – we might conclude that there was a supreme Intellect behind this explosion and that all the pieces dispersed by the explosion had been made to move in a very controlled way.

This quotation from Sir Fred Hoyle, who accepted his mistake after many years of opposition to the Big Bang Theory, expresses the situation very well:

The big bang theory holds that the universe began with a single explosion. Yet as can be seen below, an explosion merely throws matter apart, while the big bang has mysteriously produced the opposite effect – with matter clumping together in the form of galaxies.

While stating that the Big Bang’s giving way to order is contradictory, he surely interprets the Big Bang with a materialistic bias and assumes that this was an “uncontrolled explosion”. He, however, was, in reality, the one who became self-contradictory by making such a statement simply to dismiss the existence of a Creator. For if a great order arose with an explosion, then the concept of an “uncontrolled explosion” should have been set aside and it should be accepted that the explosion was extraordinarily controlled, in other words, that Almighty Allah originated this explosion.

Another aspect of this extraordinary order formed in the universe following the Big Bang is the Creation of a “habitable universe”. The conditions for the formation of a habitable planet are so many and so complex that it is almost impossible to think that this formation is coincidental.

Careful measurement puts the rate of expansion very close to a critical value at which the universe will just escape its own gravity and expand forever. A little slower and the cosmos would collapse, a little faster and the cosmic material would have long ago completely dispersed. It is interesting to ask precisely how delicately the rate of expansion has been ‘fine-tuned’ to fall on this narrow dividing line between two catastrophes. If at time I S (by which time the pattern of expansion was already firmly established) the expansion rate had differed from its actual value by more than 10-18, it would have been sufficient to throw the delicate balance out. … The big bang was not, evidently, any old bang, but an explosion of exquisitely arranged magnitude.

The laws of physics that emerged together with the Big Bang have not changed at all over a period of 15 billion years. Furthermore, these laws stand on calculations so scrupulous that even a millimetre’s variation from their current values can result in the destruction of the whole structure and configuration of the universe.

The famous physicist Prof. Stephen Hawking states in his book A Brief History of Time, that the universe is set on calculations and balances more finely tuned than we can conceive. Hawking states with reference to the rate of expansion of the universe:

If the rate of expansion one second after the big bang had been smaller by even one part in a hundred thousand million million, the universe would have recollapsed before it ever reached its present size.

Paul Davies also explains the unavoidable consequence to be derived from these marvellously precise balances and calculations:

It is hard to resist the impression that the present structure of the universe, apparently so sensitive to minor alterations in the numbers, has been rather carefully thought out… The seemingly miraculous concurrence of numerical values that nature has assigned to her fundamental constants must remain the most compelling evidence for an element of cosmic design.

In relation to the same conclusion, an American professor of Astronomy, George Greenstein, writes in his book The Symbiotic Universe:

As we survey all the evidence, the thought insistently arises that some supernatural agency – or, rather Agency – must be involved.

This Mind is Almighty Allah, the Omnipotent. Allah is He Who creates all things with perfect order and flawless measure.