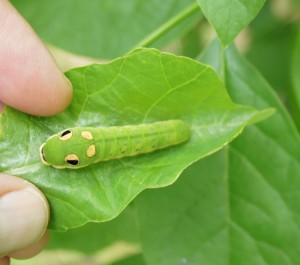 The mimicking ability displayed by this caterpillar is too flawless and perfect to have come about gradually, in the way the evolutionists like to claim.

The creature in the picture is Hemeroplanes triptolemus. Anyone looking at this image is bound to think it is a snake, but it is, in fact, a snake-mimicking caterpillar.

Hemeroplane caterpillars can be found in various parts of Central and South America and Africa. This species, which looks no different from other caterpillars under normal conditions, undergoes a rapid change when threatened and miraculously comes to resemble a snake.

These animals are in fact quite harmless but possess the ability to deceive predators by striking at them to make them think they are about to bite them. Although they are not poisonous like many snakes are, they adopt this tactic to ward off other animals that threaten them.

The mimicking ability displayed by this caterpillar is too flawless and perfect to have come about gradually, in the way the evolutionists like to claim. With that immaculate mimicry ability God has given it, Hemeroplanes triptolemus praises and glorifies Omniscient and Almighty God.

“He is God – the Creator, the Maker, the Giver of Form. To Him belong the Most Beautiful Names. Everything in the heavens and earth glorifies Him. He is the Almighty, the All-Wise.” (Al-Hashr, 24)