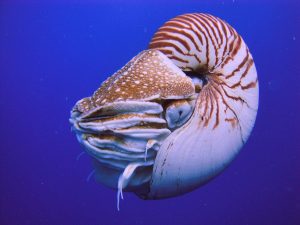 Obviously, all features that a nautilus has are created.

You must have seen submarines on TV or in journals. These vessels, which are capable of operating far below the surface of the sea without being noticed, are used in ensuring national security and in some scientific research.

How submarines operate is: As the special diving tanks in a submarine are filled with water, the vessel becomes heavier than water and sinks deep down in the ocean. If water in the tank is emptied and replaced by pressurized air, the submarine rises to the surface of the water again.

Now we will examine the Nautilus, a very interesting creature that employs exactly the same method. The Nautilus has a spiral, pearly-lined shell and dives in the way that submarines do. It has an organ shaped like a snail shell that is 19 cm (7.5 inches) in diameter. This organ contains 28 interconnected “diving chambers”.

These diving chambers operate in the same way as the tanks in a submarine do; in other words, the nautilus needs pressurized air. In submarines, this need is met by a special system installed by engineers in relevant places in the submarine. But how does the nautilus find the pressurized air necessary to expel the water? 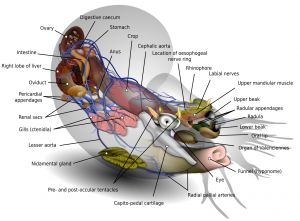 The answer to this question introduces us to another amazing feature that Allah created. A special gas is produced in the nautilus’ body. This gas is conveyed to the chambers through its bloodstream and eventually expels the water from the cells.

So a nautilus can sink or float to protect itself against its enemies while hunting. In fact, the diving capacity of the Nautilus is much higher than that of a submarine.

The special system of this interesting marine animal is created for us to reflect on. Now consider for a moment. Could a nautilus have attained this system by chance? Could it itself have acquired the bodily structure that enables gas production? Furthermore, this is not the only feature of the Nautilus.

The pressure underwater is quite intense. This is why you feel pressure in your ears when you dive deep. Nevertheless, the pressure you experience is comparatively low; as one descends further in the water, the pressure increases and after a certain depth has deadly effects on living creatures. However, although it is a very small animal and has only an external shell to protect itself, the Nautilus is not affected by this pressure, which can be extreme.

Obviously, all features that a nautilus has are created. This being cannot possibly on its own build the bodily structure to resist a pressure of tons underwater. Allah, Who originates everything perfectly, created this excellent structure. In a verse of the Qur’an, Allah invites people to be heedful: