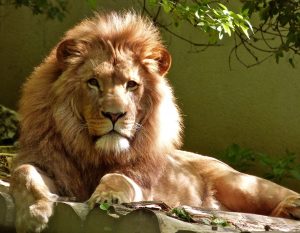 There is a special design in a lion’s eyes which means that they collect as much light as possible.

The lion belongs to the cat family and is very predatory. With his long trunk, short legs, large head, strong appearance, and majesty, he deserves the title “the King of the Jungle” even though lions do not really live in the jungle but in the savannah.

A lion’s tail is about three meters (118 inches) long. He is approximately one meter (39 inches) tall and he weighs around 230 kilograms (506 pounds). To put it another way, lions are really big cats that are one and a half to two meters (59 to 78 inches) longer than you.

Male lions have manes. This soft hair surrounds the face and covers the back of the head, neck, and shoulders and extends from the chest to the belly. This mane gives the male lion a very imposing appearance indeed. The mane that Allah has given male lions makes them look much stronger and more impressive than they actually are.

Lions spend all day lying or sleeping under the shadow of rocks or trees and wake up at night to hunt. Lions possess perfect eyesight at night and can easily see their prey. There is a special design in a lion’s eyes which means that they collect as much light as possible. Pupils and lenses that are relatively larger than other animals’ eyes make lions good hunters in the animal kingdom. Allah has given them features which are most appropriate in relation to their environment.

You can hear a lion roaring in particular at night, the time of their hunting, and before dawn. When the lion roars, life on the savannah almost stops; the wolf stops howling and the leopard stops growling. Everybody remains silent and listens to the king while the monkeys climb the top branches of trees, screaming as loud as they can.