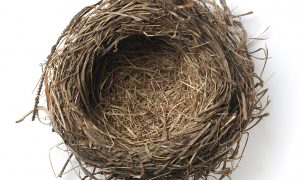 These behaviors of birds could be compared to those of engineers who have gone through years of education and training in their fields.

You certainly must have seen birds’ nests built on trees or on tops of buildings, and sometimes on a corner of a balcony. These are merely the nests of the few bird species that you know. But so many bird species live in the world and they build so many different types of nests that one should really reflect on this.

All birds build their nests so that they blend in with their natural environments. Let us consider coastal birds. These birds build their nests on the surface of the water and the nest does not sink. The materials used and the shape of the nest are all particularly created. So, even if the water level rises, neither the nest nor the offspring are damaged. These animals have innate capabilities to build their nests and have no need of training. They could not have possibly learnt such a task over time; if they had tried to do it by trial and error, the nest would have sunk as the water rose. However such a thing never happens because all coastal birds have built their nests in the same way since the first day they were created.

Some birds living in swamps build the walls of their nests very high so that the eggs do not fall out because of the wind. How is it that a bird, which carefully protects its eggs, knows about the risk of eggs falling out and being broken? We see here that the bird takes a wise precaution.

Have you ever wondered how birds, which lack consciousness and intellect as we understand them, can consider such delicate details?

These behaviors of birds could be compared to those of engineers who have gone through years of education and training in their fields. While building a house, engineers consider details such as the strength of the building, materials to be used and location; only then can construction begin. As you have seen in the above examples, birds also build their nests according to a plan. But they do not need any tools or education. They act by the inspiration of Allah and easily carry out their tasks. These birds and what they perform are evidence of Allah’s perfect creation. It is surely the All-Knowing Allah Who inspires them to do everything they do.