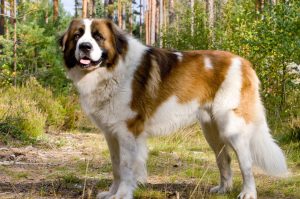 The dog’s sense of smell is also very keen. The olfactory center – the center for smelling – in its brain is forty times more developed than that of man. For this reason, their sense of smell is superior to man’s.

Dogs are smarter than most creatures. They are easy to educate. Well-educated dogs are sometimes used as watchdogs. A watchdog can render a creature that is five to six times bigger ineffective.

It is interesting, though, that these dogs, which can become terrifyingly wild in times of danger, pose no harm to their owners. In the face of a threat, they put their lives in jeopardy to save their owners and under no circumstances do they abandon them.

The existence of hundreds of dog species of different colors and sizes is one of the signs of Allah’s matchless creation. In the Qur’an, our Lord’s unique creation is related as follows:

“He is the Originator of the heavens and the earth. How could He have a son when He has no wife? He created all things and He has knowledge of all things. That is Allah, your Lord. There is no god but Him, the Creator of everything. So worship Him. He is responsible for everything.” (Al-An`am: 101-102)

Let’s consider the following: assume that you have never seen a dog before and somebody asks you to draw a picture of one. Would you be able to accomplish this? Of course not. No one could do this. Because we cannot do anything unless Allah provides us an example in nature.

Airplanes, for example, are designed in imitation of the flying systems of birds. Robots are imitations of man’s body systems. However, our Lord has created countless species without any previous example: Penguins living at the south pole, lions – the kings of the savannah, dolphins, butterflies, birds, and bees, etc., in short, Allah created all creatures.

Allah, Who has given all creatures various features, has also given dogs physical characteristics that make them different from other living beings. For example, dogs have 42 teeth, that is, 10 more than human beings. This way, they can grind and break their food, especially bones, into pieces without difficulty. Moreover, thanks to the special creation of their eyes, in darkness dogs have better eyesight than human beings. They can perceive moving objects from farther away.

Furthermore, because dogs can hear voices at frequencies beyond our threshold of hearing, they notice noises from distances four times farther away than we can. For example, a man cannot hear the extremely high-pitched sound of the dog whistle used to give commands to dogs while dogs can hear it easily.

The dog’s sense of smell is also very keen. The olfactory center – the center for smelling – in its brain is forty times more developed than that of man. For this reason, their sense of smell is superior to man’s.

By means of all these abilities, dogs can sense the smell of prey, trace it and fetch a hunter’s catch even if it is kilometers away. A sniff of something belonging to a person suffices for a police dog to find its owner. Those huge flabby-cheeked dogs the Saint Bernards, for example, can easily detect injured people stuck beneath the snow with their sensitive noses and rescue them. This extraordinary sense of smell that dogs have is itself a miracle.

Dogs also use their noses to breathe air. Passing through the nose, air is filtered, warmed and moisturized and then it makes its way to the lungs.

This way, in spite of their thick hair, they do not sweat on hot days. Allah has given them such a perfect system, whereas we, human beings, immediately sweat when we run even for half an hour. But dogs never sweat even if they run for hours. Now that you have learned this fact, you don’t have to worry about dogs when you see them with their tongues lolling out on hot days.

Also, if you think about dogs, you will remember that their bodies are always very soft and bright. What gives this softness and brightness to their skin is its oil glands.

There are some special systems within dogs’ bodies. Thanks to these systems, the paws of a dog are never hurt, nor do they wear out and their claws never become irritated. As you see, our Lord has solved even a minor problem of one creature by means of a protective mechanism He has designed for it. Our Lord creates everything in harmony. As this example also shows, Allah has equipped all creatures with the abilities they need. Such examples lead us to think and to realize the artistry in our Lord’s creation.