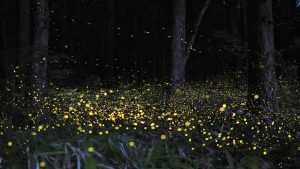 Despite all the research that has been carried out, humans have not yet produced light as prolific as that of fireflies.

Have you ever seen lights moving in trees at night? The source of these lights, which may sometimes be so numerous that a tree may be suffused with them all over, is fireflies. These are the best known of luminescent living creatures. These animals, which emit light and illuminate trees in the darkness of the night, are among those that scientists have studied most. Soon we will examine why, but first, let us see how these creatures use light.

Fireflies produce green-yellow lights in their bodies. Light is the means of communication for fireflies. As well as giving mating signals, this light is also used for defence against enemies. By means of light, their enemies understand that fireflies are not tasty and thus decide not to feed on them.

The main characteristic of these beetles is that they make the most of light and they virtually do not waste any energy. Therefore, fireflies have become a subject for investigation by scientists for years. However, despite all the research that has been carried out, humans have not yet produced light as prolific as that of fireflies.

It is amazing how a living creature produces light, yet is not adversely affected by its heat. You must have noticed that lamps produce heat as well as illumination. If you touch a source of light, for example, a light bulb, the heat burns your hand. So you might wonder how the firefly is not injured by the heat it produces. In fact, that is what is so amazing about luminescent creatures: the heat they produce does not affect them. That is because the light produced by these creatures is completely different from what we use as a medium of illumination. This light is called “cold light”, and heat is not emitted during the production of this type of light. Therefore, production of this type of light is very effective and scientists have tried for years to imitate this type of light.

As well as fireflies, various underwater creatures, insects and other species also produce their own light. Each has a different way to produce its light, different fields in which to use the light and different durations and types of light. And each on its own is a wonder.

Obviously, it was not the creatures who equipped themselves with the systems to produce light and who ensure the continuance of these systems. A system that produces light in a living creature’s body cannot possibly come into existence as a result of coincidences. Moreover, a structure so perfect that does not cause any damage to the body could not have possibly emerged during the production process. All luminescent creatures are evidence of Allah’s artistry in excellent creation. Allah shows us the evidence of His eternal knowledge, intelligence and power in the creatures He creates. He also reminds mankind that no matter how hard man tries, he cannot bring the flawless mechanisms in nature into existence unless our Lord so wills.