The Well-Designed Nest of a Megapode 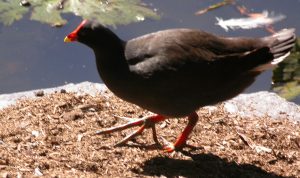 There is a Power Who directs and makes the megapode carry out these tasks, which require intellect. This power is Allah, Who created everything in the most beautiful way.

The Well-Designed Nest of a Megapode

Megapodes live in Australia and build very special nests for their eggs. The male megapode digs a large hole and fills it with wet, decaying plant matter. The bird has a very important and specific reason to do so. Bacteria in the decaying plant matter produce heat and thus warm the nest. In order to keep the temperature steady, the male makes ventilation openings and continuously checks the temperature of the nest by sticking its beak through these openings. It also makes a funnel-shaped opening on the surface of the heap of vegetation. This opening lets rainwater leak into the heap during winter and thus keeps it moist.

Once the nest is ready, the female comes along and lays its eggs in the hole. However, the temperature of the nest increases continuously during the summer, upon which the male megapode covers the nest with sand. In this way, it tries to prevent transmission of heat to the nest.

Now, let us ask a question. Before you read these paragraphs, did you know that heat is released by decaying plants? It is natural for you not to know about this unless you have already read a relevant book. Many people do not know. Yet, megapodes have this knowledge. What is more, they make use of this knowledge for the benefit of their young.

Well then, but how could a bird do such delicate calculations and sensitive measurements? How could it take technical precautions according to the results it achieves? Why does it undertake such a troublesome task for its young?

In order to do all these, a bird needs to have technical knowledge like that of an engineer and the intellectual functions of a healthy human being. Certainly, a bird does not have the reason and the brain to act like an intelligent and learned person. There is a Power Who directs and makes the megapode carry out these tasks, which require intellect. This power is Allah, Who created everything in the most beautiful way.

You can see that these creatures cannot do all these wonderful things by themselves and you understand that Allah created all of them. Yet, there are some people who refuse to accept this fact, which you have understood at once. Allah has informed us of these people in the Qur’an. In Surat Al-Ra`d, Allah states: