Perception in the Eye and the Ear 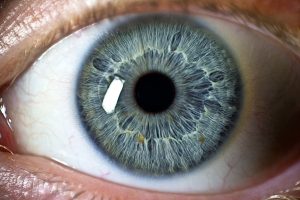 Even the most developed television screen produced by the greatest television producer in the world cannot provide such a sharp image for you.

The eye and how we see

Light rays coming from an object fall oppositely on the eye’s retina. Here, these light rays are transmitted into electric signals by cells and reach a tiny spot at the back of the brain, the “center of vision.” These electric signals are perceived in this center as an image after a series of processes. With this technical background, let us do some thinking.

The brain is insulated from light. That means that its inside is completely dark, and that no light reaches the place where it is located. Thus, the “center of vision” is never touched by light and may even be the darkest place you have ever known. However, you observe a luminous, bright world in this pitch darkness.

The image formed in the eye is so sharp and distinct that even the technology of the twentieth century has not been able to attain it. For instance, look at the book you are reading, your hands with which you are holding it, and then lift your head and look around you. Have you ever seen such a sharp and distinct image as this one at any other place? Even the most developed television screen produced by the greatest television producer in the world cannot provide such a sharp image for you.

This is a three-dimensional, colored, and extremely sharp image. For more than 100 years, thousands of engineers have been trying to achieve this sharpness. Factories, huge premises were established, much research has been done, plans and designs have been made for this purpose. Again, look at a TV screen and the book you hold in your hands. You will see that there is a big difference in sharpness and distinction. Moreover, the TV screen shows you a two-dimensional image, whereas with your eyes, you watch a three-dimensional perspective with depth.

For many years, tens of thousands of engineers have tried to make a three-dimensional TV and achieve the vision quality of the eye. Yes, they have made a three-dimensional television system, but it is not possible to watch it without putting on special 3-D glasses; moreover, it is only an artificial three-dimension. The background is more blurred, the foreground appears like a paper setting. Never has it been possible to produce a sharp and distinct vision like that of the eye. In both the camera and the television, there is a loss of image quality.

Evolutionists claim that the mechanism producing this sharp and distinct image has been formed by chance. Now, if somebody told you that the television in your room was formed as a result of chance, that all of its atoms just happened to come together and make up this device that produces an image, what would you think? How can atoms do what thousands of people cannot?

If a device producing a more primitive image than the eye could not have been formed by chance, then it is very evident that the eye and the image seen by the eye could not have been formed by chance. The same situation applies to the ear. The outer ear picks up the available sounds by the auricle and directs them to the middle ear, the middle ear transmits the sound vibrations by intensifying them, and the inner ear sends these vibrations to the brain by translating them into electric signals. Just as with the eye, the act of hearing finalizes in the center of hearing in the brain.

The ear and how we hear

The situation in the eye is also true for the ear. That is, the brain is insulated from sound just as it is from light. It does not let any sound in. Therefore, no matter how noisy is the outside, the inside of the brain is completely silent. Nevertheless, the sharpest sounds are perceived in the brain. In your completely silent brain, you listen to symphonies, and hear all of the noises in a crowded place. However, were the sound level in your brain measured by a precise device at that moment, complete silence would be found to be prevailing there.

As is the case with imagery, decades of effort have been spent in trying to generate and reproduce sound that is faithful to the original. The results of these efforts are sound recorders, high-fidelity systems, and systems for sensing sound. Despite all of this technology and the thousands of engineers and experts who have been working on this endeavor, no sound has yet been obtained that has the same sharpness and clarity as the sound perceived by the ear. Think of the highest-quality hi-fi systems produced by the largest company in the music industry.

Even in these devices, when sound is recorded some of it is lost; or when you turn on a hi-fi you always hear a hissing sound before the music starts. However, the sounds that are the products of the human body’s technology are extremely sharp and clear. A human ear never perceives a sound accompanied by a hissing sound or with atmospherics as does a hi-fi; rather, it perceives sound exactly as it is, sharp and clear. This is the way it has been since the creation of man.

So far, no man-made visual or recording apparatus has been as sensitive and successful in perceiving sensory data as are the eye and the ear. However, as far as seeing and hearing are concerned, a far greater truth lies beyond all this.

To Whom Does the Consciousness that Sees and Hears within the Brain Belong?

Who watches an alluring world in the brain, listens to symphonies and the twittering of birds, and smells the rose?

The stimulations coming from a person’s eyes, ears, and nose travel to the brain as electro-chemical nerve impulses. In biology, physiology, and biochemistry books, you can find many details about how this image forms in the brain. However, you will never come across the most important fact: Who perceives these electro-chemical nerve impulses as images, sounds, odors, and sensory events in the brain?

There is a consciousness in the brain that perceives all this without feeling any need for an eye, an ear, and a nose. To whom does this consciousness belong? Of course it does not belong to the nerves, the fat layer, and neurons comprising the brain. This is why Darwinist-materialists, who believe that everything is comprised of matter, cannot answer these questions.

For this consciousness is the spirit created by Allah, which needs neither the eye to watch the images nor the ear to hear the sounds. Furthermore, it does not need the brain to think.

Everyone who reads this explicit and scientific fact should ponder on Almighty Allah, and fear and seek refuge in Him, for He squeezes the entire universe in a pitch-dark place of a few cubic centimeters in a three-dimensional, colored, shadowy, and luminous form.