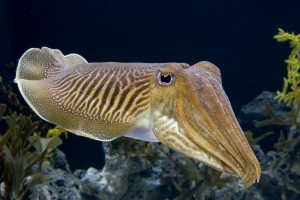 Almighty Allah created a very special system which cephalopods can use when they need or want to increase their speed.

Cephalod shellfish such as the squid and the octopus have reactive swimming systems based on hydrodynamic propulsion, in other words, the ability to expel water at very high speeds.

Engineers are trying to further develop speed technology by seeking inspiration from these abilities of cephalopods.

Almighty Allah created a very special system which cephalopods can use when they need or want to increase their speed. This system, which engineers have examined with admiration and attention, works perfectly. The reactive swimming systems of these creatures are a result of special body structures Almighty Allah created especially for them. So, what are these body structures that make these beings special?

There is a thin layer of skin that surrounds the body cavity where the organs are placed called a coat. Cephalopods accumulate water inside them via the muscles found underneath this skin layer and then they swim by strongly expelling this water. The water taken inside the coat wall is squirted outside with the help of a conically shaped pipe. The working of the system is like that of the kickback principle used in the production of space vehicles, in other words, rocket systems. This force occurs as a result of the cone-like opening surrounded by many muscles closing very fast. With the help of the squirting pipe, cephalopods can swim as they wish, do sudden moves and arc.

Assistant professor Kamran Mohseni from the Space Engineering Department at the University of Colorado has designed new generators by getting inspiration from the water expulsion system used by cephalopods to be able to move under water. These designs help vehicles that will be used under water to maneuver better at low speeds.

It is a must that vehicles used under water have safe maneuvering abilities, especially under difficult conditions. Manned or unmanned submarines that will have such a mechanism will provide the opportunity to explore in greater detail ecosystems all over the world from underwater volcanoes to the cold depths under the ice pack in polar regions. The hydrodynamic designs of current vehicles makes it difficult to maneuver at low speeds and in narrow spaces, and to get close to somewhere or stand in place in open fields. Therefore, the speeds of vehicles with such qualities has to be very low.

Capsules equipped with a similar system are expected to help doctors diagnose certain diseases by being placed in the digestive systems of human beings. Thereby, this matchless art of engineering of Almighty Allah could bring benefits to humanity in the medical field as well.

There is no doubt that cephalopods cannot create such a detailed mechanism, which human beings can only replicate after months of research, in their own bodies. Almighty Allah, Who creates all things in one piece and its proper place, created these beings with the most suitable system to protect themselves and tend for their own needs. In one verse, our Lord reveals as such:

“Have they not seen how We created for them, by Our own handiwork, livestock which are under their control?” (Ya-Sin, 71)