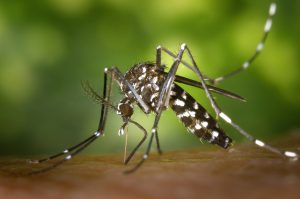 Shortly after the building of an electricity generation plant in Canada in the 1920s, all its generators broke down. This was caused by hundreds of thousands of mosquitoes congesting the engines of the generators.

So what was it that attracted the mosquitoes to the generators? A short time after the generators were cleaned, the same thing happened again and the problem was solved by calling in a mosquito expert.

This interesting event draws our attention to the special system that enables mosquitoes to mate. Male mosquitoes recognize females by the sounds made by their wings, and thanks to this they find the females and mate with them.

The incomparable hearing capacity of the mosquito

Mosquitoes mate on the wing. However, until the males reach maturity, that is to say during the first 24 hours of their short lives, they are not able to mate, for at this stage their antennae have not yet dried out. The deaf males cannot hear the sound of the females’ wings, that is to say the mating call.

Hearing is very advanced in mosquitoes. On the pair of small, hair-covered antennae on a male’s head, there is an organ composed of numerous sensory cells. This system, which is known as the “Johnston’s organ,” receives the vibrations of sound waves and differentiates between them. These hairy feelers can only perceive sound waves when they are in an upright position.

Let’s think about the sounds we can hear on a summer day when there are plenty of mosquitoes around… traffic noise, people talking, animal sounds, in short, a multitude of sounds, some of which are audible and some of which are inaudible to the human ear, depending upon their frequencies. It should be quite difficult for the male to pick out the sound of the female beating her wings in the midst of this tumult of sounds.

However, the sensitive “ears” of the male are able to distinguish the sound of the female out of all these sounds and he flies straight to the female to mate. When a female flies into a crowd of mosquitoes and is noticed by one of the males, she is held by special pincers located near the male sexual organ and mating usually takes place in the air, but sometimes on the ground. After mating, the male returns to the flock and after a time he dies.

At this point, the subject should be examined in more detail. There is a very interesting system at work. The mosquito recognizes the opposite sex by the beat of her wings.

First of all, the female could well beat her wings more slowly and the male beat his more quickly. This creates a number of questions that need to be answered by evolutionary theory, which puts the characteristics of living things down to coincidence.

However, each mosquito beats its wings at a specific speed to distinguish its sex as though it is conforming to some order. In fact, this frequency difference has no meaning just by itself. If the male mosquito were not created with such a superior sense of hearing, this beating of the wings would have no meaning. The vibrations produced by the female mosquito would be as meaningless to the male mosquito as they are to humans. In such a situation, mating would not take place due to the male’s inability to perceive the female.

Without a doubt, the opposite could also be possible. If the male had an excellent sense of hearing, but if all mosquitoes, whether male or female, beat their wings at different frequencies, the perceptive ability of the male would be rendered useless. This would mean the extinction of the mosquito at the first generation in both scenarios.

This clearly shows us that the system enabling mosquitoes to recognize one another for the purpose of mating has had to function perfectly since the very first pair of mosquitoes. Thus the only explanation for the sudden emergence of such a finely tuned system is an intelligent design. God created the mosquito with this special system already in-built.

Reflecting on the evidence of creation

The mosquito is one of the proofs of creation mentioned in the Qur’an. God creates boundless evidence to remind man of His existence and His omnipotence. It is of the utmost importance to be aware of this fact, to reflect on it and to acknowledge God’s power. Each person has a duty to reflect on the evidence of creation and live his life with the consciousness of the true purpose of his existence. The fact that man can discover this purpose through reflection is contained in a verse of the Qur’an:

Have they not traveled about the Earth and do they not have hearts to understand with or ears to hear with? It is not their eyes which are blind but the hearts in their breasts which are blind. (Al-Hajj 22:46)

It is very easy for a person to comprehend God’s existence. In the Qur’an, Prophet Abraham (pbuh) is given as an example of this. Prophet Abraham (pbuh) acknowledges as a matter of conscience that there is only one God. In spite of his polytheistic tribe, this noble person gave up the idols worshiped by his tribe and devoted himself to God alone. The following verses of the Qur’an tell us of Prophet Abraham’s (pbuh) certainty in his faith in God:

As in the example of Prophet Abraham (pbuh), it is self-evident that people of conscience can reflect on the existence of God. People who know this truth have the duty of living their lives in a way that is pleasing to God. God tells us in verses of the Qur’an that a brief life of six to seven decades in this world should not be preferred to eternal life in the Hereafter:

The life of this world is nothing but a game and a diversion. Surely, the Hereafter is better for those who guard against evil. So will you not use your intellect? (Al-An`am 6:32)

He who is conscious of having been created as God’s creature and who therefore lives his life in a way that is pleasing to our Lord lives a good life on Earth and may also hope for eternal life in Paradise.

Taken with slight modifications from the book: The Miracle in the Mosquito, chapter titled: A Brand-New Body. www.harunyahya.com

2 thoughts on “Skills of the Mosquito”