Tales of “Feathered Dinosaurs” No Longer Deceive Anyone 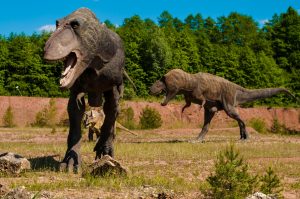 Tales of “Feathered Dinosaurs” No Longer Deceive Anyone

This report was carried in a variety of Darwinist publications in order to support the lie that birds evolved from dinosaurs, and yet again revealed the despair that has been afflicting Darwinists for a very long time.

It can be seen from this article that some Darwinists still imagine that they can use propaganda to attract people into their ranks. But they are mistaken. Because people no longer believe in the theory of evolution. They can no longer be taken in, but laugh at reports of evolution. It is no longer possible to convince people of this falsehood by means of outdated propaganda!

Because people have touched with their own hands and personally examined evidence that totally exposes the lie of evolution; in other words, they have come into contact with 100 million fossils. It is for that reason that constantly repeating false claims such as “a feathered dinosaur has been discovered” or “fish did move onto dry land,” that people have now learned by heart, can never and will never bear any fruit in the face of 100 million fossils that all prove the fact of Creation.

Because Evolution Has Collapsed

WHY, if species have descended from other species by insensibly fine gradations, DO WE NOT EVERYWHERE SEE INNUMERABLE TRANSITIONAL FORMS? Why is not all nature IN CONFUSION INSTEAD OF THE SPECIES BEING, AS WE SEE THEM, WELL DEFINED?

INNUMERABLE TRANSITIONAL FORMS MUST HAVE EXISTED, WHY DO WE NOT FIND THEM EMBEDDED IN COUNTLESS NUMBERS IN THE CRUST OF THE EARTH?

WHY THEN IS NOT EVERY GEOLOGICAL FORMATION AND EVERY STRATUM FULL OF SUCH INTERMEDIATE LINKS?

Geology assuredly DOES NOT REVEAL any such finely graduated organic chain; and this, perhaps, IS THE MOST OBVIOUS AND GRAVEST OBJECTION WHICH CAN BE URGED AGAINST MY THEORY. (Charles Darwin, The Origin of Species, pp. 172, 280)

Indeed, more than 100 million fossils have to date been unearthed from various strata of the earth. But NOT A SINGLE ONE IS A TRANSITIONAL FOSSIL.

These 100 million fossils unearthed reveal that NATURE IS NOT IN A STATE OF CONFUSION, as Darwin anticipated, BUT IS RATHER FULL OF COMPLETE, PERFECT, FLAWLESS LIVING THINGS WITH ALL THEIR PARTS INTACT. The earth contains many animals that have become extinct but bear close similarities to one another. But this DOES NOT MEAN THEY ARE INTERMEDIATE FOSSILS. All these life forms WERE BROUGHT INTO BEING FROM NOTHING, WITH NO DEFICIENCIES OR IMPERFECTIONS, BUT IN COMPLETELY PERFECT STATES.

Darwin was well aware of this. And these facts have indeed emerged as THE GRAVEST OBJECTION to the theory, just as Darwin foresaw. In other words, they have demolished Darwinism.

And above and beyond all this, new sciences have shown that CELLS, CHROMOSOMES AND PROTEINS ARE EXTRAORDINARILY AND IRREDUCIBLY COMPLEX.

It has been discovered that there is enough information in DNA TO FILL 1 MILLION ENCYCLOPEDIA PAGES and that IT IS IMPOSSIBLE FOR SUCH A GLORIOUS STRUCTURE TO COME INTO BEING BY CHANCE.

It has been established that atoms, the basic building blocks of everything, POSSESS A FLAWLESS ORDER AND GLORIOUS COMPLEXITY.

The theory of evolution has suffered a definite and total collapse in the face of all these facts. That is why people now regard reports of dinosaurs growing feathers and turning into birds as FAIRY TALES.

These birds, which were able to fly perfectly and were fully formed millions of years ago, are identical to birds living today.

In the same way that present-day birds were created out of nothing, those birds living all those hundreds of millions of years ago were also created by the will and at the command of our Almighty Lord.

People are now well aware of this. And that is why persisting in hollow evolutionary propaganda will serve no purpose at all.