The Creation of Honey Ants 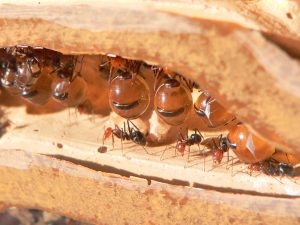 These examples (for instance honey ants) show clearly that various organs have not been developed for performing certain functions by the living beings, although their prior existence has sometimes led to certain acts and tasks to be performed and sometimes not.

Many types of ants are fed with the digestive wastes of aphids called “honey”. This substance, in fact, bears no relation to real honey. However, the digestive waste of aphids, which have fed on plant sap, is given this name because it contains a high proportion of sugar. Thus, the workers of this species, called honey ants, collect honey from aphids, coccidae, and flowers. The ants’ method of collecting honey from the aphid is very interesting. The ant approaches the aphid and starts shoving its belly. The aphid gives a drop of digestive waste to the ant. The ant starts shoving the belly of the aphid more and more to get more honey and sucks the liquid that comes out. Then how do they utilize this sugared food and what good is this food for them later on?

There is a great division of labor among honey ants in this phase. Some ants are used as “jars” to keep the nectar collected by other workers!

In every nest, there is one queen, workers and also honey carriers. The colonies of these ants are usually located near the dwarf oak trees the workers can extract nectars from. After the workers carry the nectar, once having swallowed it, to their nests, they take it out of their mouths and pour it into the mouths of young workers who will keep the honey. These workers, nicknamed honeypots, use their own bodies to store the sweet liquid food the colony often needs to get through hard times in the desert. They are fed until they swell up to the size of blueberries. Then they dangle like amber globes from the ceilings of their chambers until called upon to regurgitate nectar to hungry sisters. While attached to this ceiling, they look like a small and translucent bunch of grapes. If any of them falls down, the workers return it to its previous position right away. Honey in the honeypots weighs almost 8 times as much as an ant.

In winter, or in the arid season, ordinary workers visit the honeypots to meet their daily food demands. The worker ant places its mouth on to the “pot’s” and the pot exudes a small drop of honey from its store by contracting its muscles. The workers consume this honey of high nutritional value as food in adverse seasons.

It is an interesting and awe-inspiring situation for a living being to reach a weight 8 times its own, having decided to serve as a honeypot and to be able to live hanging from its feet without any harm coming to it. Why have they felt the need to accept such a difficult and dangerous position? Have they thought about this unique storage technique themselves and controlled their bodily developments accordingly? Just think, while a man cannot even control the slightest development in his body, how can an ant, who does not even have a brain in the real sense, do this on its own?

Honey ants display behavior that the evolution theory cannot explain. It is totally illogical to maintain that they have developed the honey storage method and the organs required for it by chance. In fact, in scientific sources, we meet many realistic statements on this and similar subjects. Take, for instance, the explanation of Prof. Etienne Rabaud, Director of the Institute of Biology of the Paris University:

These examples (for instance honey ants) show clearly that various organs have not been developed for performing certain functions by the living beings, although their prior existence has sometimes led to certain acts and tasks to be performed and sometimes not. This shows that the organs have not developed out of the adaptation by living beings to life conditions, but life conditions have arisen out of prior existence of such organs and out of their functions as we have seen. The following question may be asked as Darwin did: Does the event of clearing, or weeding out of one who loses the capacity to live, or the adaptation of organs to new conditions take place in this evolution? We contend that events have proven that such an evolution, or such a change, has not occurred. In fact, a totally different phenomenon has taken place.

These explanations given by Professor Rabaud show us clearly a conclusion that anyone may arrive at by thinking with his conscience for just a very short time. A sole Creator Who is the real source of knowledge and intellect has created all living beings with their faultless organs and perfect behavior. This truth has been expressed in the Qur’an as follows:

“He is Allah, the Creator, the Maker, the Giver of Forms. To Him belong the Most Beautiful Names: Everything in the heavens and earth glorifies Him. He is the Almighty, the All-Wise.” (Al-Hashr, 24)