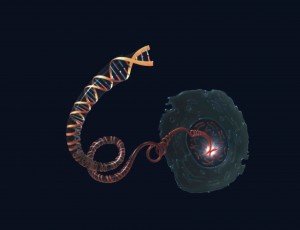 When living things other than man are studied, it appears that there is no molecular relationship such as that claimed by evolutionists. This fact shows that the concept of similarity is not evidence for evolution.

This article answers the following question: Why Is the Claim that Human and Ape Genomes are 99 Percent Similar and that this Confirms Evolution Not True?

Many evolutionist sources from time to time carry the claim that humans and apes share 99 percent of their genetic information and that this is proof of evolution.

This evolutionist claim focuses particularly on chimpanzees and says that this creature is the closest monkey to man, for which reason there is a kinship between the two. However, this is a false proof put forward by evolutionists who take advantage of the layman’s lack of information on these subjects.

For a very long time, the evolutionist choir had been propagating the unsubstantiated thesis that there is very little genetic difference between humans and chimps. In every piece of evolutionist literature, you could read sentences like “we are 99 percent identical to chimps” or “there is only 1 percent of DNA that makes us human.” Although no conclusive comparison between human and chimp genomes has been done, the Darwinist ideology led them to assume that there is very little difference between the two species.

A study in October 2002 revealed that the evolutionist propaganda on this issue—like many others—is completely false. Humans and chimps are not “99% similar” as the evolutionist fairy tale went on. Genetic similarity turns out to be less than 95 %. In a news story reported by CNN.com, entitled “Humans, chimps more different than thought,” it reads:

There are more differences between a chimpanzee and a human being than once believed, according to a new genetic study.

Biologists have long held that the genes of chimps and humans are about 98.5 percent identical. But Roy Britten, a biologist at the California Institute of Technology, said in a study published this week that a new way of comparing the genes shows that the human and chimp genetic similarity is only about 95 percent.

Britten based this on a computer program that compared 780,000 of the 3 billion base pairs in the human DNA helix with those of the chimp. He found more mismatches than earlier researchers had, and concluded that at least 3.9 percent of the DNA bases were different.

This led him to conclude that there is a fundamental genetic difference between the species of about 5 percent.

New Scientist, a leading science magazine and a strong supporter of Darwinism, reported the following on the same subject in an article titled “Human-chimp DNA Difference Trebled“:

We are more unique than previously thought, according to new comparisons of human and chimpanzee DNA. It has long been held that we share 98.5 percent of our genetic material with our closest relatives. That now appears to be wrong. In fact, we share less than 95 percent of our genetic material, a three-fold increase in the variation between us and chimps.

Biologist Boy Britten and other evolutionists continue to assess the result in terms of the evolutionary theory, but in fact, there is no scientific reason to do so. The theory of evolution is supported neither by the fossil record nor by genetic or biochemical data. On the contrary, evidence shows that different life forms on Earth appeared quite abruptly without any evolutionary ancestors and that their complex systems prove the existence of an “intelligent design.”

Human DNA is also similar to that of the worm, mosquito, and chicken! 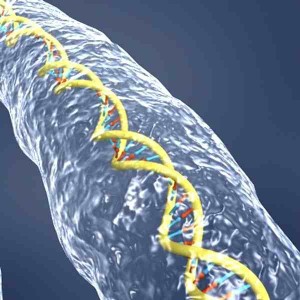 Moreover, the above-mentioned basic proteins are common vital molecules present, not just in chimpanzees, but also in very many completely different living creatures. The structure of the proteins in all these species is very similar to that of the proteins present in humans.

For example, the genetic analyses published in New Scientist have revealed a 75% similarity between the DNA of nematode worms and man. This definitely does not mean that there is only a 25% difference between man and these worms!

On the other hand, in another finding which also appeared in the media, it was stated that the comparisons carried out between the genes of fruit flies belonging to the Drosophila genus and human genes yielded a similarity of 60%.

When living things other than man are studied, it appears that there is no molecular relationship such as that claimed by evolutionists. This fact shows that the concept of similarity is not evidence for evolution.

“Common Design”: The Reason for Similarities

It is surely natural for the human body to bear some molecular similarities to other living beings, because they all are made up of the same molecules, they all use the same water and atmosphere, and they all consume foods consisting of the same molecules. Certainly, their metabolisms, and therefore their genetic make-ups, would resemble one another. This, however, is not evidence that they evolved from a common ancestor.

This “common material” is the result not of evolution but of “common design,” that is, of their being created upon the same plan.

It is possible to explain this matter with an example: all construction in the world is done with similar materials (brick, iron, cement, etc.). This, however, does not mean that these buildings “evolved” from each other. They are constructed separately by using common materials. The same holds for living beings as well.

However, the complexity of the structure of living things cannot be compared to that of bridges, of course.

Life did not originate as the result of unconscious coincidences as evolution claims, but as the result of the creation of God, the Almighty, the possessor of infinite knowledge and wisdom.