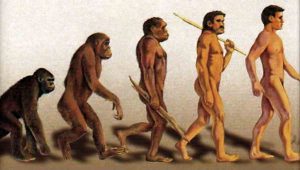 Evolutionists—believers in Darwin—say that one day some of these atoms came together by chance.

The person who has proposed the theory of evolution was called Charles Darwin and he lived about 150 years ago. Darwin did not believe that Allah created all living things. According to him, everything happened on its own and purely by accident. He thought that creatures changed shape into other creatures and this is how all the creatures came about.

This means, according to Darwin, that one day, fish turned into reptiles by chance. Another day by more luck, reptiles started to fly thus becoming birds. According to the story that Darwin proposed, humans were formed from apes. This means that, to Darwin, your ancestor was an ape!

As is stated elsewhere, the tiniest part that makes up animate and inanimate things is the atom. This means that in reality, you are made up of billions of atoms that have come together.

When earth appeared for the first time, there were no creatures on it. There were only some inanimate things. Evolutionists—believers in Darwin—say that one day some of these atoms came together by chance. This means that there was a strong wind or maybe a cyclone one day after earth was formed, and it helped these atoms come together. What happened to these atoms after that, you ask?

According to Darwin’s story, these atoms joined to make cells. As you know, every living thing is made up of cells. The cells unite to make our eyes, ears, blood, heart, and in short, all of our body and the cells are very complex. It is impossible for something so complex to be made of atoms that have come together by chance.

In a cell, there are hundreds of different tiny organs. We could relate the cell to an enormous factory except that we have to remember that it is organic and not mechanical; it is just a way of speaking.

In a cell, there are manufacturers, transporters for the materials, entrance and exit gates, production centers, message carriers, energy control centers, etc. Well, do you think that it is possible for a factory to form all by itself, with stones, soil, and water coming together after a possible storm and all of it by chance? Of course not! Everyone would laugh at such a ridiculous claim. Nevertheless, evolutionists do make a claim that is just as ridiculous by saying, “the cell was formed by chance”.

As stated in the evolutionists’ allegation, these cells formed living things when they came together by some kind of luck.

Let them get a huge barrel. Allow them to put inside this barrel all the atoms that they wish. Permit them to put inside the barrel whatever else their hearts desire. Let them put inside the barrel all the things necessary to make a living being. Then they can either warm-up or electrify this barrel. Allow them to carry out whatever they want freely. They can keep watch over the barrel for millions of years. (They can pass the task to younger evolutionists, as their lifetimes would not be enough.)

What would happen as a result of all this?

Neither could anyone like the professors keeping watch over the barrel emerge. Not only could a professor not emerge, not even one of the professor’s trillions of cells could emerge.

Atoms are lifeless. Can lifeless matter link together to produce a living, laughing, thinking being?

Could an intelligent person believe such a thing? Of course, no living thing could come out of that barrel. That is impossible because living things aren’t made up of lifeless matter coming together by coincidence. Allah created all living things. Allah decided to create humans, mountains, lakes, lambs, lions, and flowers when there was nothing around, and He has created everything from nothingness just by giving the order “Be!”