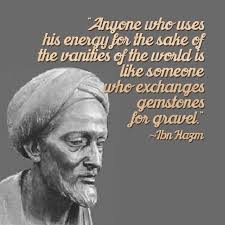 He possessed a very sharp memory, was extremely quick-witted and highly contemplative. He had abundant courage and patience, was sincere and truthful and was very strict about keeping promises.

His Works on History

In history, he adopted his own style of writing. When he wrote biographies of the Caliphs, he wrote their names, titles, duration of the caliphate, and the important incidents and happenings during the caliphate. He even wrote about the Caliphs who were elected through a consultative process. He described the four brothers who became caliphs. He even wrote about Caliphs who held the caliphate only for a few days. He has compiled the biographies of five women whose sons became Caliphs.

While writing Spain’s history, he made a special mention of all those scholars who worked on jurisprudence, Hadith, Tafsir, literature and history and penned notable works.

Ibn Hazm has widely benefited from the books of Ibn Kamil al-Shajari who was a disciple of Tabari. He has recorded all those incidents that happened during his age and even recorded the verbal accounts. This is one reason why Ibn `Aqeel thinks Ibn Hazm did not refer to original sources of the history.

Ibn Hazm was a great investigator in historical affairs. Translators of his works have rated him highly and opine that he gathered the knowledge of history from both Oriental and Western sources. He authored several books in history.

Ibn Hazm’s biography of Prophet Muhammad is a description of the Prophet’s miracles, performance of Hajj pilgrimage, battles, and letters and emissaries he sent to several emperors. It was titled Jawame As-Seerah An-Nabawiyya. It is a source book on the life of the Prophet.

He was a poet too. He is described as an expert in etymology, syntax and literature. His poetry is laced with nuggets of wisdom and sound advice. He was a wordsmith and used to put his delicate thoughts in embellished language. He even inducted the terms from Fiqh, philosophy and other disciplines in his poetry. His disciple, Hameedi, compiled these couplets in a book titled Huroof Mu`jam. He was, indeed, a widely respected poet. He composed poetry for several occasions and with varied objectives. Several of his couplets urge one to read them repeatedly.

Even though he indulged in romantic poetry during his youth, he avoided it later and advised others to keep away from it as it inflames lust, incites mental waywardness and erodes moral foundations. He even advised keeping away from poetry that inflames passions and instigates violence such as the poetry of `Antar, `Urwa b. al Ward and Sa`d b. Nashib.

Ibn Hazm stepped into the arena of mentoring too. He wrote several books and essays. Some of his opinions would be instructive: He thought that generally people err while judging men and women. According to him, a righteous woman is one who keeps herself away from evils when asked to do so and would not seek excuses to continue to act according to her own whims and fancies. And a bad woman is one who insists on following her own desires and digs out all kinds of excuses to conform to her own wishes. A gentleman is one who does not sit with evil men, who does not act at the bidding of his own Nafs (ego), keeps away from all places where people indulge in gossip, rumor-mongering, and where they talk ill of others and create noise.

Through his own assessment, Ibn Hazm found that every individual, regardless of his being faithful, non-believer, rich or poor, possessing authority or just ordinary, was in misery. Ibn Hazm would suggest remembrance of God for salvation from all kinds of misery, difficulties, anxiety or travails. He would advise everyone who complained about his difficulties to direct himself to Allah who was the rescuer.

Ibn Hazm used to confess his shortcomings. He said he tried to rectify them in the light of the teachings of Prophets and leading lights of Islam and says this led to a lot of them being checked with the help of God. He said about himself: “I used to express excessive joy when glad, expressed extreme anger, went overboard while indulging in humor and used to be jealous of others and craved fame and publicity. I tried to rectify myself and gradually overcame all of them and developed humility. Now I find joy within myself.”

Ibn Hazm is one of the earliest followers of the Zahiri Madh-hab which was founded by Imam Da’ud `Ali b. Khalaf Abu Sulayman Al-Zahiri. According to Dr. Muhammad Salam Madhkur, this Madh-hab was named so because the people who followed it were doing so by following the apparent meaning of the Qur’an and Hadith.

Zahiri Madh-hab spread out into the regions of the Orient during the third and fourth century of Hijrah. It drew more supporters than the Maslak of Ahmad b. Hanbal. Abu Zahrah says that a big group of `Ulama spread out of Cordova in the third Hijri century and propagated the Zahiri Maslak. It was only then that Imam Ibn Hazm adopted this Maslak and lent it a further push to its zenith through his scholarship and Ijtihad. 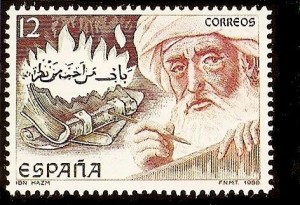 He possessed a very sharp memory, was extremely quick-witted and highly contemplative. He had abundant courage and patience, was sincere and truthful and was very strict about keeping promises. However, he had a sharp tongue of criticism which earned him many enemies. It is said that his tongue and Hajjaj b. Yusuf’s swords were partitions of one instrument. He debated with many of the Malikiyyah, as well as with Abu al-Walid al-Bajji, resulting in his widespread unpopularity. His books were burned and he declared heretic. During his last years, he had to take refuge in a small village, was struck by leprosy because of his consumption of nothing but dairy products. He died at 72, but has left behind a work that history would like to preserve, Al-Muhalla.

He reported that he was 26 when he attended a burial ceremony. He entered the Mosque and sat down. Someone told him to get up and offer the two Rak`ahs of Tahiyyatu al-Masjid, which he promptly did. After the burial was over, he entered the Mosque and attempted the same two Rak`ah of Tahiyyatu al-Masjid again. Someone prevented him, saying that no prayers were to be offered after `Asr. He felt ashamed and asked a scholar as to who was the most renowned scholar of Fiqh. That incident turned an ignorant man into Ibn Hazm.